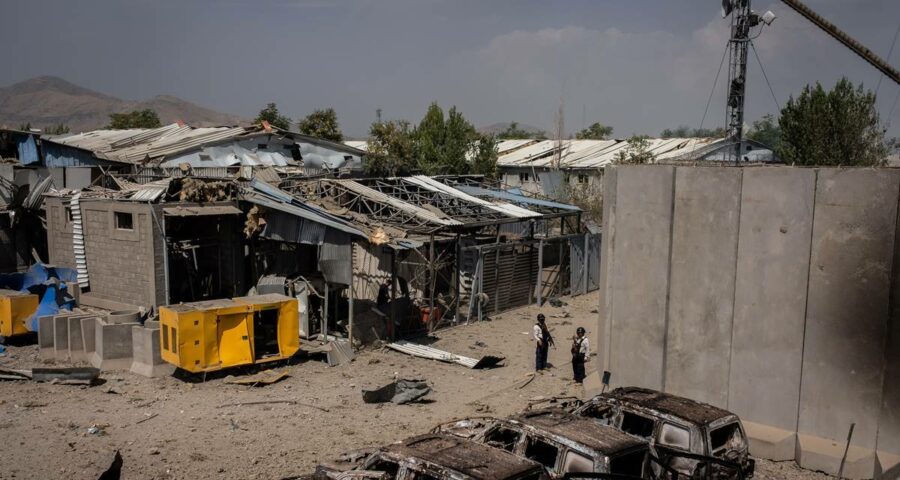 The exact number of Nepali nationals in the country is unclear, and the country does not have an embassy in Afghanistan and lacks resources for helping people stuck there. The suicide bomber driving a sedan packed with explosives struck in the early hours of the morning, as the minibus crawled through Kabul’s traffic.

A piece of shrapnel pierced Amrit Rokaya Chhetri’s left ear. He was lucky. Nine of his fellow security workers, hired by a contractor to protect Canada’s Embassy in Afghanistan, were killed immediately as metal tore through the packed bus in 2016. Ultimately, 13 Nepalis were among the dead.

They were less than 700 feet from their dormitory. The Taliban claimed responsibility.

“During the day I play the harmonium to forget, or I hang out with my friends,” said Chhetri, 41, now living in his home village in Nepal. “If that day haunts me at night, I go to the gym for physical exercise, as my doctors suggested.” The attack five years ago focused attention on the little-known but crucial role that Nepali security personnel play in protecting officials, diplomats and companies in Afghanistan. Hired by private contractors, many are ethnic Gurkhas who have served in the Nepali, Indian or British military, and they often work under conditions that have drawn protests from labor activists. But Nepal, a landlocked country in the Himalayas, is one of the poorest in Asia, making security jobs abroad look appealing.

Now Nepal is trying to get thousands of its people out of Afghanistan. The task is daunting. Reports from Afghanistan suggest the Taliban are tracking those who worked with Western countries. The exact number of Nepali nationals in the country is unclear, and the country does not have an embassy in Afghanistan and lacks resources for helping people stuck there.

The government of Sher Bahadur Deuba, Nepal’s new prime minister, is urging Western nations to help rescue Nepali security guards while they evacuate their own citizens from Kabul.

“We have made some diplomatic efforts to coordinate their evacuation,” said Gyanendra Bahadur Karki, Nepal’s minister for law, justice and parliamentary affairs.

Karki said evacuating Nepali contractors has been complicated by the fact that many have worked in Afghanistan illegally for years, making it difficult to find and count, much less rescue, them.

The number of Nepalis working in Afghanistan depends upon which government institution you ask, Karki said.

“There are no accurate records,” he said. “But we are committed to make their repatriation at the earliest, irrespective of their status.”

Some who have escaped described a nerve-racking experience.

“It’s been difficult to reach the airport,” Kamal Deep Bharati, a security guard from Nepal who was working in Afghanistan, said last week while waiting to leave Kabul. “We have already handed over our weapons to the Taliban. The Taliban have encircled the hotel where we are staying.”

Over the weekend, Bharati managed to reach the airport and was able to board a flight to London.

Nepal reacted with relief last week when more than 100 of its nationals were flown out by the United States, including Gurkhas who had worked at the US Embassy. As of Sunday, 504 Nepali contract workers, including those working for the US and British embassies in Kabul, were evacuated out of Kabul, Nepal’s foreign affairs ministry said.

Many more may remain. For example, some people from Nepal get jobs abroad after going through neighboring India to avoid government hassles. More than 350 contract workers have sought help from the foreign ministry for immediate evacuation from Afghanistan.

Government records in Nepal show 14,565 Nepalis have obtained work permits to get jobs in Afghanistan in recent years. Of them, an estimated 1,500 Nepalis worked in security positions for the embassies of the United States and other countries, as well as international groups.

Many in Nepal believe the Taliban could single out its citizens for reprisals. Its soldiers have fought fiercely against the Taliban, either as part of British or other forces or later as security contractors. Between 2001-14, British Gurkhas were involved in several tours in Afghanistan, with 12 killed and 16 injured, according to Tim I. Gurung, a Gurkha veteran and the author of a history of the Gurkhas.

Security work abroad has sometimes sparked anger in Nepal. Injured security guards and the families of those killed sometimes struggle to get the compensation they say they are owed.

Nepal had tried to stop its citizens from private security work in Afghanistan after the 2016 suicide bombing, though many continued to seek jobs, some working illegally. Nepal lifted the ban after Western countries applied pressure to reverse the decision.

The Afghanistan crisis struck at a time when the Nepali government is in disarray. The country lacks a minister of foreign affairs and a minister of foreign employment after a court last month removed the previous prime minister, K.P. Sharma Oli, from office. No Nepali diplomat has presented credentials in Kabul. the country conducts what little diplomacy it has with Afghanistan through India’s Embassy there.

For now, Nepali citizens in Afghanistan must rely on other countries to help them escape.

Chhetri, the survivor of the 2016 suicide bombing in Kabul, urged officials helping with evacuation efforts to make sure those who protected the safety of others would be safe themselves.

“Afghanistan was never a safe zone,” he said. “It is not safe and will not become safe. So, our fellow guards should be evacuated out of Afghanistan as soon as possible. What happens if someone is killed there in a blast or shooting because of a delayed evacuation?”