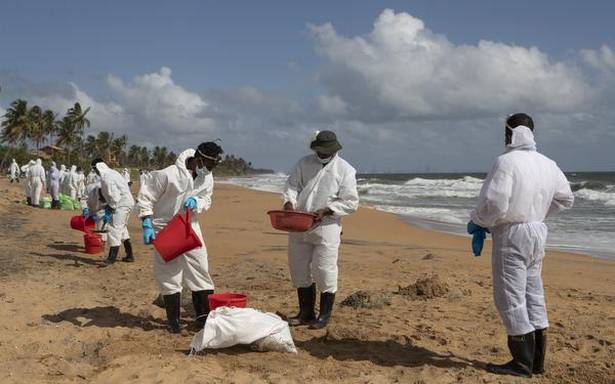 Sri Lanka on Saturday made an interim damage claim of USD 40 million from the owners of the Singapore-flagged cargo ship that caught fire near the outer area Colombo port on May 20 and caused the country’s worst-ever marine ecological disaster.

Sri Lanka has lodged the claim of USD 40 million through the Attorney General following a directive by Prime Minister Mahinda Rajapaksa.

"We are still assessing the scale of damage, environmental and economic and decided to make this interim claim of," Rohitha Abeygunawardena, the Minister of Ports, told reporters here.

The cargo vessel – MV ‘X-PRESS PEARL’- was carrying a consignment of chemicals and raw materials for cosmetics from Hazira in Gujarat to Colombo Port when it caught fire some 9.5 nautical miles away from the port of Colombo.

All 25 crew members of the ship — of Indian, Chinese, Filipino and Russian nationality — were rescued on May 21.

The recovered Voyage Data Recorder (VDR), which is an instrument installed on a ship to continuously record vital information related to the operation of a vessel, has now been handed over to the local law enforcement agencies to assist ongoing investigations.

Though the fire on the ship was doused by a joint effort of the Sri Lanka Navy and the Indian Coast Guard, the efforts to drag the ship away from the port’s outer harbour area into deep seas has failed as the rear end of the ship came to be stuck after being submerged.

Environmental officials said tonnes of waste material collected along the shoreline has been collected and stored for environmental impact assessments.

The vessel was carrying hazardous goods – Nitric Acid and chemicals. Tonnes of plastic pellets were seen polluting the shoreline forcing the fisheries authorities to ban fishing in the surroundings.

However, the state Minister for Fishing Kanchana Wijesekera said the fishing ban has been lifted with effect from Saturday.

"Around 20,000 fisher families were affected and we had made arrangements to provide them with income support," Mr Wijesekera said.