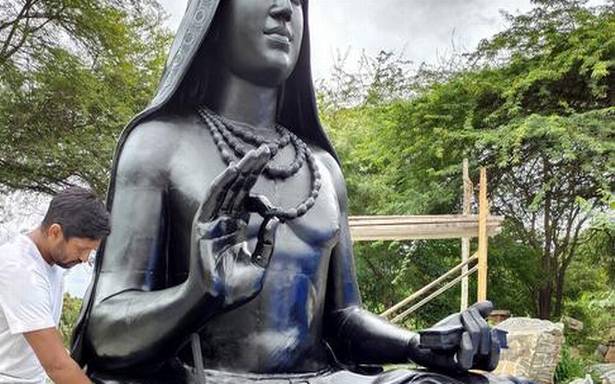 Sculptor Arun Yogiraj is giving finishing touches to it

A 12 ft.-tall-statue of Adi Shankaracharya being sculpted in Mysuru will adorn the samadhi of the exponent of Advaita Vedanta at Kedarnath in Uttarkhand.

The samadhi was destroyed in the 2013 flash flood that hit Kedarnath and is now being restored by the Jindal Social Works.

A life-size statue of Adi Shankaracharya was also conceived as part of the restoration project and out of many sculptors from across the country who displayed their model, the authorities selected the model prepared by Mysuru-based sculptor Arun Yogiraj.

The statue is receiving finishing touches and Mr. Yogiraj told The Hindu that it is made of Krishnashila stone. A fifth generation sculptor who has inherited the art and science of sculpting from his father, Arun Yogiraj is an MBA from the University of Mysore but decided to pursue the family tradition of sculpting. “I did not pursue any professional course in fine arts but learnt it as a hobby from my father,’’ he added.

For this particular project Yogiraj procured about 120 tonnes of the stone as raw material and after completing the chiselling process it weighs about 35 tonnes. The work commenced in September 2020 and the sculpture displays Adi Shankaracharya in the sitting position. It will be airlifted.

In recent times, Arun Yogiraj also sculpted the statue of Jayachamarajendra Wadiyar which was installed and the erstwhile Hardinge Circle was renamed after the late maharaja. The other important statue which is now a landmark in the city is the one of Ramakrishna Paramahamsa at Ramakrishna Nagar.