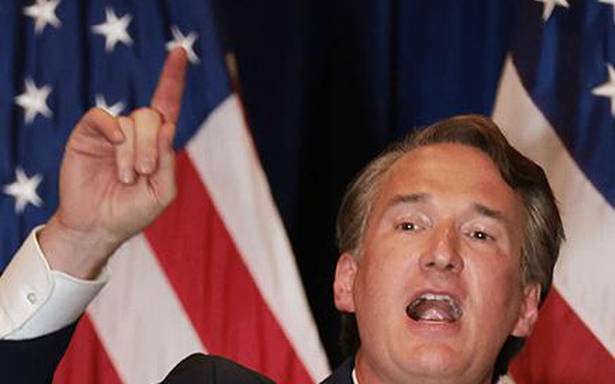 The race was expected to be a comfortable Democratic win

The Republican candidate pulled off a stunning upset to win the Governor’s mansion in the U.S. State of Virginia on Wednesday, U.S. television networks projected, in a race seen as an early verdict on President Joe Biden’s first year in office.

Newcomer Glenn Youngkin was 2.7 points ahead of Democrat Terry McAuliffe in the neck-and-neck tussle shortly after midnight, with more than 95% of the vote counted, prompting NBC, CNN and ABC to call the election for the Republican.

A harbinger of the parties’ prospects in next year’s midterm elections, the race was initially expected to be a comfortable Democratic win but instead became a toss-up in the closing days of the campaign.

A private equity multi-millionaire who has never run for office defeating a former popular Democratic Governor will be seen as a disaster for Mr. Biden going into the all-important 2022 races that will determine who controls Congress.

“All right Virginia — we won this thing! How much fun!” Mr. Youngkin, who poured at least $20 million of his own fortune into the race, told cheering fans after dancing onstage to Norman Greenbaum’s 1969 hit “Spirit in the Sky.”

Calling his victory a “defining moment,” he told the crowd: “Together, we will change the trajectory of this commonwealth. And friends, we are going to start that transformation on day one.”

The election, a neck-and-neck tussle for weeks, resonated nationwide as a proxy war between Mr. Biden and former President Donald Trump, who gave Mr. Youngkin his early backing.

Mr. Youngkin’s campaign will now likely become a blueprint for Republicans across the country as they strategise on how to leverage Mr. Trump’s base while avoiding becoming tainted by his toxic brand among moderates in the midterms.

The Democratic faithful had badly wanted the race to be a referendum on Mr. Trump but in reality he had little to do with the campaign and was never likely to prove the galvanizing nemesis they had hoped for.