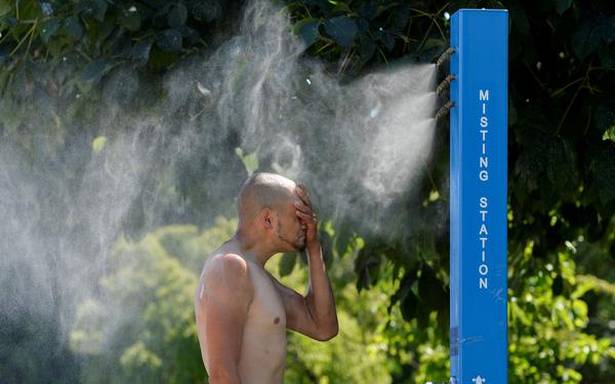 As the U.S. Pacific Northwest sweltered to the south, a heat warning was in effect for most of western Canada.

The village of Lytton in the interior of southern British Columbia sizzled under a new all-time high temperature for Canada on Sunday, reaching 46.1 degrees Celsius.

The reading by Environment Canada in Lytton surpassed the previous national high of 45 C, which was set in Saskatchewan in 1937.

As the U.S. Pacific Northwest sweltered to the south, a heat warning also was in effect for most of western Canada, and the weather agency said numerous daily temperature records had been broken across British Columbia.

In the coastal city of Vancouver, where the temperature peaked at 31 C at midafternoon on Sunday, many people headed to the beach, though the crowds appeared smaller than usual in the sweltering heat.

Others, like Natalie Moser, sought out the shade at neighbourhood parks.

Ms. Moser said she would normally stay at a local hotel to enjoy the pool during especially hot weather, but that option was hampered by pandemic restrictions. She said she thought the beach would be too hot, even with an umbrella in hand.

“Today was just really about getting something that was cool,” she said.