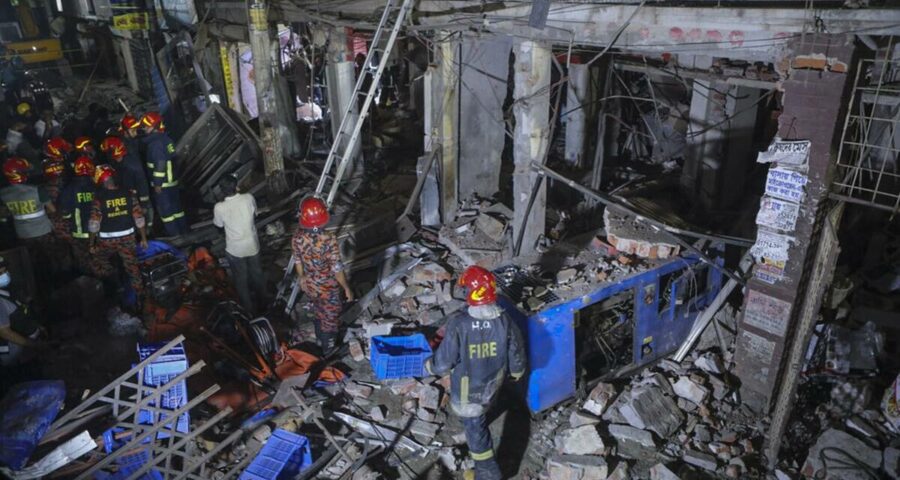 At least seven buildings were damaged because of the force of the explosion, Rahman said. At least seven people died and dozens were injured in an explosion Sunday in Bangladesh’s capital.

But authorities could not determine the nature of the explosion that damaged vehicles and surrounding buildings, the police and fire department said.

The explosion took place in the evening at a building in Dhaka’s Moghbazar area, and rescuers reached the scene, said Faisalur Rahman, a fire control room official.

At least seven buildings were damaged because of the force of the explosion, Rahman said.

“Certainly, this is a big explosion. Fire service and bomb disposal unit of Dhaka Metropolitan Police’s Counter Terrorism Unit have arrived at the scene. Their experts are working together. They are investigating the origin of the blast and the subsequent damages,” said Sajjad Hossain , a deputy police commissioner in Dhaka.

Witnesses said it was a scene of destruction with glass shards and broken concrete on streets. Two passenger buses were heavily damaged outside the building where the explosion took place, witnesses said.

“A fireball went over my head. Everything became dark and smoky with the sound. Pieces of glass started to shower from above. If I didn’t use this (a folder bag) as a cover, I would’ve been under the glass pieces. Allah saved me from them,” said Omar Sani, who was at the scene during the explosion.

“Then the buses crashed into one another, and one got crumbled. One man got out from that damage. He was in very bad condition. We brought the other injured here. We found four people including one kid at one place …. The kid died from the impact. I brought the kid to hospital,” he said.

Dhaka-based Ekattor TV stations said the condition of 10 of the injured were critical, among about 50 taken to hospitals.

It was not immediately clear what caused the explosion, but the main building where the explosion took place had a fast food shop. Reports said a faulty gas line or gas cylinders used by the food shop could be the reason behind the blast.