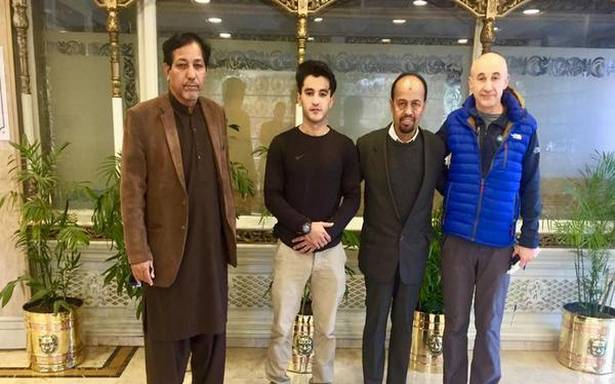 Pakistan’s military located the body of American mountaineer Alex Goldfarb-Rumyantzev on Monday in the Karakoram mountains in northern Pakistan. This was the second death of a foreign climber in the area in less than a week.

A helicopter team spotted Mr. Goldfarb’s remains during a search and rescue operation that began on Sunday, according to the Alpine Club of Pakistan.

He appeared to have fallen off the mountain, Hungarian expedition company Magyar Expedicios, which was supporting the climbers, said in a statement.

Mr. Goldfarb and Hungarian Zoltan Szlanko were planning to climb the 8,047 metre (26,400 feet) high Broad Peak, which has yet to be ascended in winter, without the use of oxygen or any porters for help, according to Magyar Expedicios.

To acclimate for that climb, the pair set out to climb nearby Pastore Peak, which is 6,209 metres high, but were met with harsh winter conditions and Mr. Szlanko decided to turn back, while Mr. Goldfarb continued alone.

Mr. Szlanko joined the search for his partner after he failed to return as planned on Saturday.

Mr. Goldfarb, a medical doctor and a lecturer at Harvard University in Boston, had volunteered to treat COVID-19 patients since the outset of the pandemic, his son Levi Goldfarb said.

“He thought it was liberating, because up in the mountains it didn’t really matter who you were at sea level — a doctor, a lawyer, or even a thief, all of those labels were stripped away and you were playing by a different set of rules. He made great friends in the mountains, he saved lives and saved himself, and he travelled the world doing it,” Mr. Levi said

Spanish climber Sergio Mingote also died in the Karakorammountains on Saturday, after he fell down a crevasse while attempting to make his way down to Base Camp on K2, the world’s second-highest mountain.

Travel restrictions due to the coronavirus pandemic dampened the traditionally active summer months of mountaineering in the region last year.