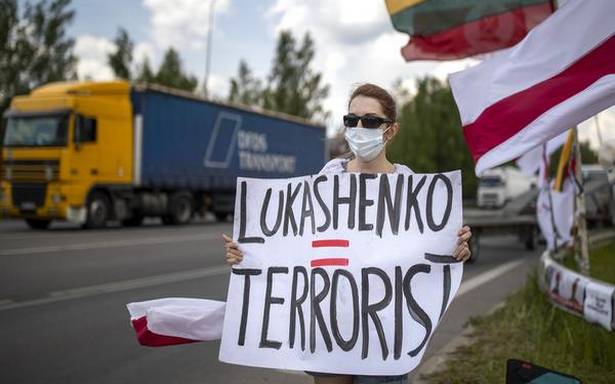 In a series of amendments to the criminal code, Lukashenko also for the first time introduced a four-year prison sentence for people found guilty of spreading false information that discredits the state.

Belarusian President Alexander Lukashenko on Tuesday signed into law prison sentences for people taking part in protests or insulting state officials, part of an unprecedented crackdown by the veteran leader since a disputed election last year.

In a series of amendments to the criminal code, Lukashenko also for the first time introduced a four-year prison sentence for people found guilty of spreading false information that discredits the state.

Under the new law, anyone who has been detained at least twice for taking part in a protest, or insulted a government official, faces up to three years in prison, whereas previously they were subjected to detentions or fines.

"This naturally worsens the situation in the field of civil and political rights," said Valentin Stefanovich of the Viasna-96 human rights group. "These laws are in fact no longer against protests, but against any dissent."

In power since 1994, Lukashenko launched a violent crackdown against mass protests after winning an election in August that his opponents say was blatantly rigged.

Lukashenko did not comment on the new measures, which parliament had first adopted last month, but in March he had warned of a tougher response to opposition.

"We need to be prepared for manifestations of destructive activity: from calls for illegal strikes to the manipulation of people’s minds through Internet technologies. For each such step we must have adequate response tools in our arsenal."

Lukashenko has previously signed amendments on laws governing the media, allowing the government to close down media outlets without needing a court order as before.

The European Union is preparing new sanctions on Minsk following the May 23 arrest of dissident Belarusian blogger Roman Protasevich after the forced grounding of a Ryanair plane while on a flight from Greece to Lithuania.

In a statement, the delegation urged Belarus to stop its "inhumane treatment of peaceful protesters and political prisoners".