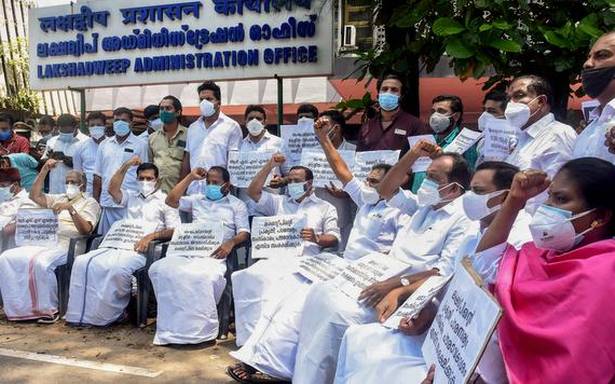 The Lakshadweep Government Employees’ Union has objected to the island administration’s decision to deploy government staff aboard fishing vessels for intelligence gathering.

In a letter to the Director of Port, Shipping and Aviation, union general secretary Fathahudheen said that the decision had made government servants who are members of the union ‘nervous’. He urged the union territory administration to desist from ‘such a move which may inflict anxiety and worry among government servants…”

There are agencies such as the police, the marine force, Coast Guard and the Navy to guard India’s territorial waters and beyond. That apart, the State and Central Intelligence agencies are at work to detect security threats. To depute officials recruited for jobs other than intelligence gathering, this would be painful, the letter maintained.

Local fishing boats operate within the territorial waters around the island group and the waters are monitored by the police. Therefore, to depute a government servant other than those working in the field of fishing to work for eight to 10 hours on fishing boats would make them tense, Mr. Fathahudheen said.

In another development, following up on a letter written by T. Abdul Khader, chairperson of the Village (Dweep) panchayat in Kavaratti, the members along with two members of the district panchayat met the District Collector Asker Ali to request him immediate assistance or supply of food and provision kits to self-employed and daily wage earners of the islands who have been hit hard by the nearly two-month COVID lockdown.

Nizamuddin K.I., a village panchayat member in Kavaratti, told The Hindu that hundreds of daily wage earners and other low-income people were finding it hard to have a proper meal with no income. “The Collector assured us that they would all be issued work passes and relief would be provided. But he’s said this before too,” Mr. NIzamuddin said.