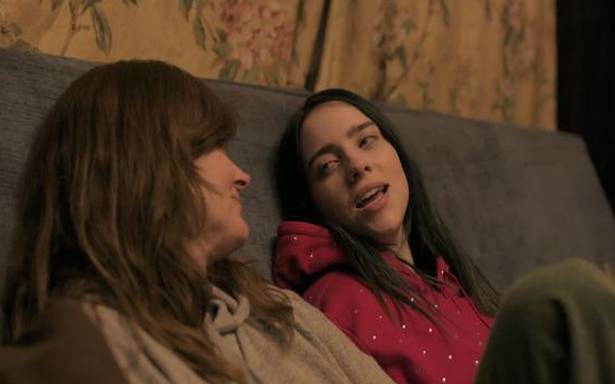 Two and a half hours seems hardly enough to understand the life and mind of an artist as grounded and eccentric, as relatable and off-the-charts as Billie Eilish. Yet, filmmaker RJ Cutler manages to do so not only with admirable transparency and intimacy, but also with an unrelenting visual balance between the simple family life and demanding global spotlight that make up this pop star’s world. If documentaries are windows into worlds, The World’s A Little Blurry is among the clearer ones.

Amid varying (but never disparate) shots: of a father’s advice about safe driving; a high-pressure ideation session between two fiercely creative siblings; a thousand weeping fans at Coachella; and moment after moment that seem emotionally pivotal for a teenager and a professional, one constant shines through – Billie herself, with her clear sense of who she is and what she owes her fans.

Billie Eilish during a performance

Many scenes in the film show what is already common knowledge for the fandom: the songwriting that Billie and her brother did in their childhood bedrooms, the constant guiding support of her mother, and her epic love for Justin Bieber (whom she eventually met and worked with).

But these segments show these truths in a way fandom discussions could not have imagined, like her organic chuckles as she works out a fun handshake with her brother and co-creater Finneas. And then there is a glance she shares with her mother while humming a song, and the frustration on her face in the aftermath of a less-than-perfect concert. Self-doubt and low points are given as much screen time as her highs and the smaller slices of her life. The non-intrusiveness of this documentary cannot be stressed enough, nor can the generosity of this family for having let the world in to such an extent.

Each scene does its job, giving the viewer a clearer idea of Billie the person. There are no curtains.

The documentary follows Billie’s life step by step. The first release of her song online, her first radio interview, then her first concert, then bigger concerts, tours, album releases, awards and the whole shebang. Keeping step with these professional milestones are all the personal ones, in a sequence that cannot but remind the viewer – sometimes out of the blue – of just how young she is. This is a teenager who completed her first sold-out performance at Coachella, one of the biggest music festivals in the world, before she had her first driver’s license. There is a lot that she has to handle, and both she and her evidently wholesome family are acutely aware of it.

A chat between Billie and interviewer Zain Lowe, at the premiere of this documentary, put even more about her journey and of this film into perspective. She describes the most touching interaction that she has had with a fan; a wordless, teary, tight hug – something she herself experienced later in life with her own idol Justin Bieber. The interaction between these two extremely young, extremely famous people – and her mother’s commentary on it – is grounded, emotional, and humbly self-aware. Her eyes speak millions, as does the camera, taking the viewer full circle back to her own fan moment before she can say a single word. This is something Cutler manages to do time after time, making his viewer root hard for the very real, no-holds barred girl on screen.

Billie Eilish: The World’s A Little Blurry is currently streaming on Apple TV+