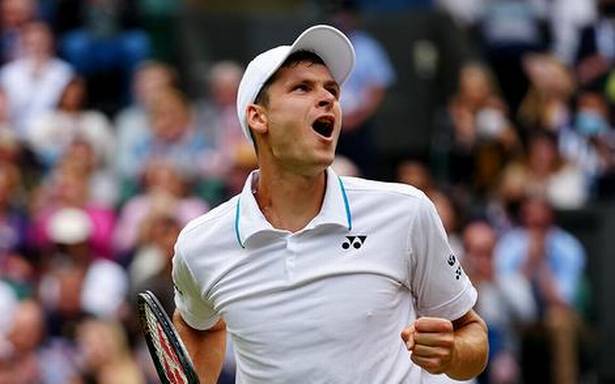 The Pole blows away the off-colour Swiss in straight sets, including a bagel in the third; Canadian beats Khachanov in an engrossing marathon

Roger Federer crashed out of Wimbledon on Wednesday, losing to Poland’s Hubert Hurkacz in the quarterfinals, potentially bringing down the curtain on the Swiss legend’s All England Club career.

It was only the eight-time Wimbledon champion’s 14th defeat at the tournament in 119 matches and his first straight sets loss since an opening round exit against Mario Ancic in 2002.

Shapovalov will play defending champion Novak Djokovic after the World No.1 made short work of Hungarian Marton Fucsovics 6-3, 6-4, 6-4 on Centre Court.

The 22-year-old Shapovalov took the first set after breaking Khachanov at 4-4. The latter, like Shapovalov appearing in his first Wimbledon quarter-final, hit back by taking the next two sets.

Whilst Khachanov was content to largely stay at the back, playing some delightful groundstrokes, especially his backhand, Shapovalov varied his game more, with his drop shots highly effective.

However, it was the Russian who wilted as Shapovalov romped through the fourth to take it into the deciding set.

The decider looked a tight affair but in reality Khachanov was hanging on, saving his service on a couple of occasions. Finally, the Russian, who had been involved in a record 13 breaks of serve in the fifth set of Monday’s win over Sebastian Korda, was broken in the ninth game and Shapovalov served out the match with aplomb.

World No.1 and five-time champion Novak Djokovic reached his 10th Wimbledon semifinal. It was 34-year-old Djokovic’s 100th career grass-court win as he made the last-four of a Major for the 41st time.

“It was a solid performance, I started extremely well and didn’t do many things wrong in the first five games,” said Djokovic. “One break of serve in the second and third set was enough to clinch the victory.”

Djokovic raced into a 5-0 lead in the first set on Wednesday before 29-year-old Fucsovics got on the board. The World No. 48 saved five set points, but the rearguard action was too late as Djokovic took the set. He cruised through the next two too.

The top seed broke in the ninth game of the second, enough for a two-sets lead. He cruised through the third too.

Djokovic had spent three hours fewer than Fucsovics in getting to the last-eight and his freshness showed when he crucially broke in the first game of the third set and then fought off two break points in the sixth.