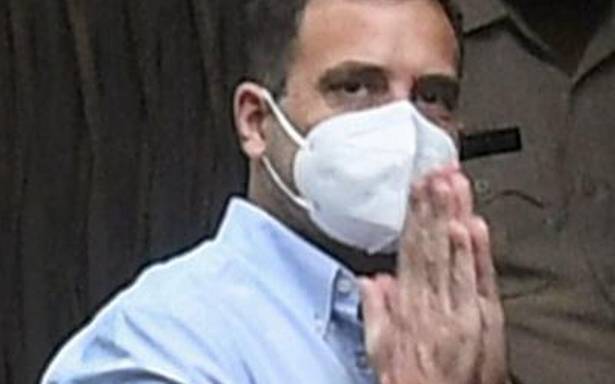 Political developments, including split in LJP, also came up for discussion

Ahead of a revamp of the Pradesh Congress Committee (PCC) in Bihar, senior leaders met former Congress president Rahul Gandhi on Wednesday to discuss about strengthening the party.

A source claimed that political developments, including the split in the Lok Janshakti Party (LJP) and the role of Chirag Paswan in the next Lok Sabha polls, also came up for discussion.

Later, Mr. Gandhi is said to have met Congress lawmakers from Bihar for a feedback on the political issues concerning the State.

“It is important to discuss ways to revive the Congress and reward people who have been loyalists to the party and its ideology,” All India Congress Committee member Kishore Kumar Jha said.

The timing of the meeting is important as the Congress is all set to replace the PCC chief, and Kutumba MLA Rajesh Ram, a Dalit who heads Bihar Congress’ SC/ST cell, is said to be among the front-runners.

The incumbent PCC chief Madan Mohan Jha had tendered his resignation last year after the party performed poorly in the Assembly elections and was blamed for dragging down the RJD-led grand alliance with a poor strike rate.

However, Mr. Ram faces stiff opposition from leaders such as Mr. Jha.

“The Congress leadership must realise the importance of having a strong leader in Bihar. Whether it was the Champaran movement of Mahatma Gandhi or the JP movement [movement led by Jai Prakash Narayan], Bihar has always played a role in awakening the masses and the Congress must regain its rightful place,” Mr. Jha added.