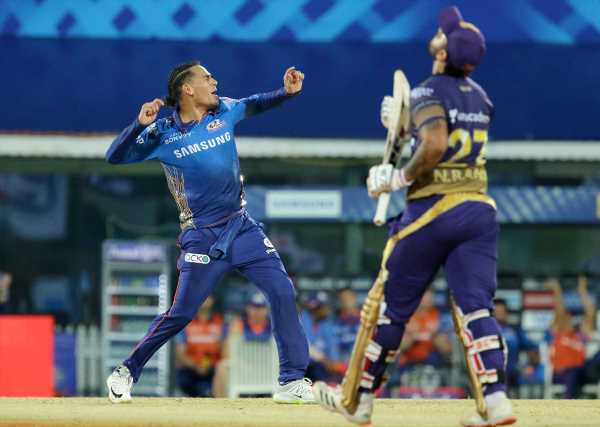 Leg-spinner Rahul Chahar’s timely strikes in the middle overs paved the way for Mumbai Indians’ stunning come-from-behind victory against the Kolkata Knight Riders in the IPL game in Chennai on Tuesday, April 13.

The match was firmly in KKR’s grip till the 13th over with the target under 50 runs and a well-set Nitish Rana continuing his good form with his second successive half-century.

But the KKR batsmen played some brainless cricket to hand the game to MI on a platter.

Only needing to score a run-a-ball for victory, KKR Captain Eoin Morgan decided to chance his arm against Chahar, but only swiped him straight to Marco Jansen at deep midwicket.

In his next over, Chahar dealt KKR another big blow with the wicket of Rana, who chipped down the track but was beaten by the top spinner and was stumped after a good hand of 57 from 47 balls.

The wickets of Morgan and Rana in quick succession gave Mumbai the belief after they looked out of the running just a few overs earlier.

Chahar finished with remarkable figures of 4/27 in his four overs as Krunal Pandya made it worse for KKR with the wicket of Shakib Al Hasan, caught at deep square leg for nine.

Krunal played a good hand in building the pressure by conceding just three runs in the 18th over, to finish with 1/13 in four overs, including 13 dot balls.

The experienced Dinesh Karthik and the big-hitting Andre Russell found it difficult to break free against Bumrah and Boult in the final two overs.

Mumbai must be relieved to escape with a win despite KKR being on top for most part of the contest.