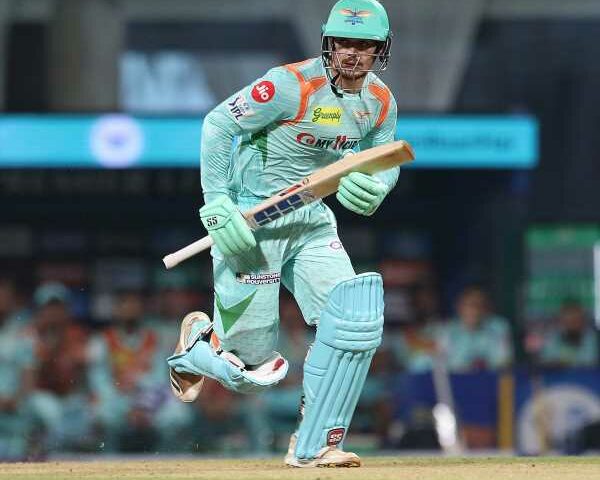 Lucknow Super Giants recorded their third win in four games thanks largely to a monumental contribution of 80 off 52 balls by Quinton de Kock — over 50% of the overall target of 149 set by the Delhi Capitals at the D Y Patil stadium in Navi Mumbai on Thursday.

While the opening stand of 73 with Rahul (24 off 25) was arguably the most crucial of the game and set the foundation for the eventual victory, their patience and willingness in the early overs to rotate the strike and keep the scoreboard ticking with singles and twos.

It took 14 balls for Rahul to hit the first boundary of the game and it was evident that Lucknow were in full control for most of the chase, until the final few overs following the fall of de Kock’s wicket.

Adding complexity to the chase was the significant presence of dew in the outfield, making both batting and bowling with the wet ball all the more unpredictable.

The floodgates really opened in the fifth over when the South African wicketkeeper-batter went after compatriot Anrich Nortje who was playing his first game since November. The fit-again pacer, playing his first IPL game in India, was smashed for three fours and a six by de Kock in an over leaking 19 runs.

After Rahul’s fall, his team needed 76 off the last 10 overs. De Kock, who collected nine fours and two sixes, put the team on the cusp of victory with his second 50-plus score of the tournament.