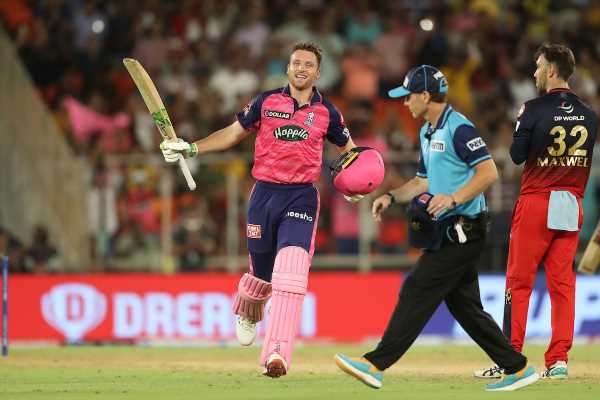 Jos Buttler once again was the main man for Rajasthan Royals.

Chasing 158 for victory for a place in the final, Yashasvi Jaiswal gave RR the perfect start, clobbering 16 runs in the opening over. But thereafter, Buttler took charge. Not once did he take his foot off the pedal.

He smashed the bowling all around the park, he took on both the spinners and pacers alike with equal ease.

He shared a 51-run opening stand with Jaiswal and even after the latter’s dismissal he wasn’t flustered. He went on to stitch another half-century partnership with Sanju Samson (off 34 deliveries).

Buttler received a life when he was dropped by Dinesh Karthik off Harshal Patel, while on 66. But Rajasthan had already dominated the match and were within touching distance of the target.

Buttler scored all around the ground, creaming bowlers left, right and centre — he smashed 10 fours and 6 sixes. He ensured to stay right until the end before getting his century (106 not out in 60 balls) — his 4th this IPL season and decorated it by scoring the winning runs with a massive six!

Buttler’s consistency and pace of run-scoring, puts Rajasthan in a good position going into the final on Sunday.