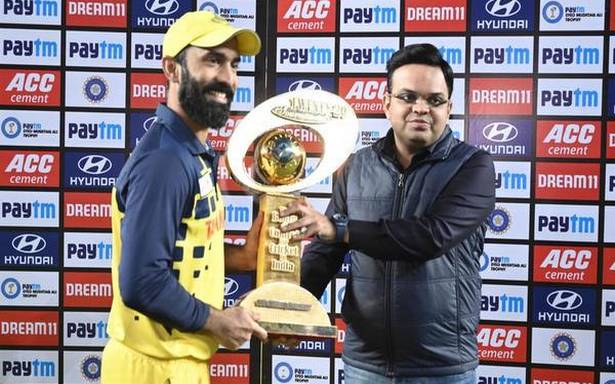 Tamil Nadu’s triumph in the Syed Mushtaq Ali Trophy ended a four-year wait for a domestic title — it previously won the Vijay Hazare Trophy in 2016-17.

More to the point, for a side that claimed the inaugural T20 championship in 2006-07 and has since supplied the Indian Premier League with some fine cricketers, TN has struggled in the format.

Dinesh Karthik, who led the team to both T20 titles, 14 years apart, said Sunday’s win was significant. “We seemed to have lost our way over the last few years, especially in T20 cricket, so this win means a lot for the State,” Karthik told The Hindu.

Karthik, who was also the captain last season when TN lost by one run to Karnataka, said, “That defeat did hurt us, but we set the tone [then] and we are now reaping the reward for that effort.”

In charge of a very young side, Karthik managed his resources well and enjoyed the challenge of getting the best out of his players, praising the likes of Sai Kishore, M. Ashwin and N. Jagadeesan.

“This team has some serious talent and quite a few of them will definitely play for IPL sides in the future. Someone like Sai Kishore is one of the most hard-working cricketers I have seen who is investing in his game and has the potential to play for the country,” said the 35-year-old wicketkeeper-batsman.

“We played some very good cricket throughout the tournament and even when we were in tough situations, the youngsters really stood up to the challenge and delivered for the team.”

On his personal goals, Karthik said, “Obviously my target is to be in the Indian team for the World T20 and tournaments like these are very important. At the same time, I am happy to make a contribution to the State team, keep pushing and guiding these young players.”