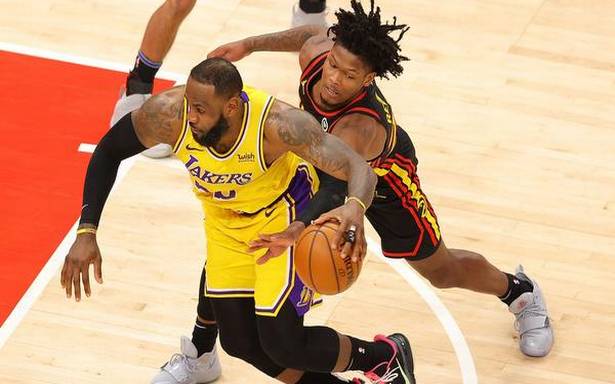 Anthony Davis scored 25 points and LeBron James added 21 as the Los Angeles Lakers overpowered the Atlanta Hawks on Monday to end its road trip with a hard-fought 107-99 victory.

James pulled down seven rebounds and weighed in with nine assists as well as a clutch three-pointer that gave the Lakers a 101-97 lead with just over a minute remaining at State Farm Arena.

It was the decisive blow in a game that had been halted midway through the fourth quarter after two female spectators heckled James from courtside. The women were ejected from the Arena.

Davis, meanwhile, was satisfied after a victory that left the Lakers firmly on the tail of the Los Angeles Clippers and Utah Jazz, who occupy the top two spots in the Western Conference.

“The last game of a road trip’s always tough and we didn’t want to buy into that ‘being tired, ready-to-go home’ mentality,” Davis said.

James, meanwhile, laughed off the incident that led to play being halted in the fourth quarter, revealing that the altercation began when he had exchanged words with a male spectator seated next to the women.

“They might have had a couple of drinks maybe. It’s fine. It kind of got blown out of proportion… fans in the stands, just feels better," James said.

Trae Young led the Atlanta scorers with 25 points and 16 assists, while John Collins chipped in with 22 points. Clint Capela added 16 points and pulled down 13 rebounds.

Elsewhere on Monday, the Milwaukee Bucks romped to a 134-106 win over Portland Trail Blazers.