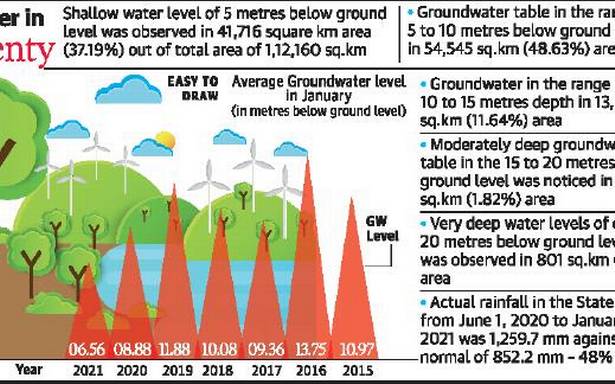 Nearly 86% of the State’s geographical area has groundwater at the depth of up to 10 metres below ground level in January, thanks to copious rainfall recorded across Telangana during the south-west monsoon period of the current water year.

It’s the best groundwater position in the month of January since formation of Telangana and also for the last 10 years. The improvement in the groundwater table is attributable mainly to the surplus rainfall recorded during the monsoon period as also to the completion of a few irrigation projects, due to which water availability in tanks and reservoirs has increased, officials of the Groundwater Department said.

According to the groundwater scenario report prepared by the department for January 2021, although the average groundwater availability in the State was 6.56 metres the water table was as high as 2.69 metres below ground level in Wanaparthy district to as deep as 11.48 metres in Medak district.

Similarly, minor fall in groundwater table was observed in Bhupalapally and Karimnagar districts and maximum fall of 0.51 metres was noticed in Nizamabad district.