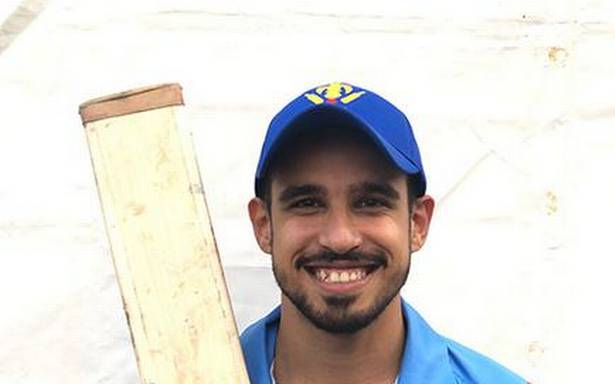 Hits a six off the penultimate ball; Kerala and Vidarbha have it easy against Himachal Pradesh and Maharashtra

Standing amid ruins, debutant Abhinav Manohar towered over the Saurashtra bowlers and took Karnataka to a fighting two-wicket victory with a penultimate ball-six for a place in the quarterfinals of the Syed Mushtaq Ali T20 Trophy here on Tuesday.

After Saurashtra’s decision to bat seemed to have backfired on being restricted to 145 for seven despite Sheldon Jackson’s 43-ball 50 (3×4, 3×6), Karnataka found the going tough when reduced to 60 for four in the 10th over.

Though Saurashtra skipper Jaydev Unadkat (4/22) returned to add two wickets in his fourth over and Kushang Patel scalped one, Abhinav was not to be denied his moment of glory.

Soon after the dismissal of K.C. Cariappa in the final over, Abhinav sent the fifth ball from Dharmendrasinh Jadeja into the stands behind mid-wicket to script a thrilling win.

In the morning, too, the winning stroke was a six as Vidarbha coasted to a surprisingly easy seven-wicket victory over Maharashtra.

Meanwhile, between the victories of Vidarbha and Karnataka at the Ferozeshah Kotla ground, Kerala cruised to its third successive eight-wicket victory after facing Himachal Pradesh at the Air Force ground.

Rajasthan vs Vidarbha; Bengal vs Karnataka; Tamil Nadu vs Kerala; Gujarat vs Hyderabad.