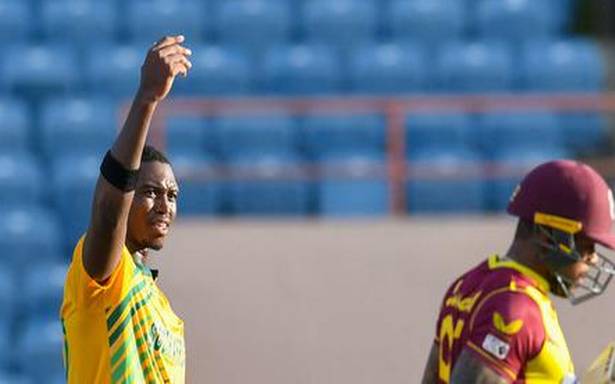 Only 24 hours after losing the opening match by eight wickets, an unchanged South Africa lineup produced an improved but still imperfect bowling and fielding performance

South Africa turned the tables on the West Indies in the second match of their Twenty20 series, winning by 16 runs to level the five-match series at 1-1.

Only 24 hours after losing the opening match by eight wickets, an unchanged South Africa lineup produced an improved but still imperfect bowling and fielding performance to restrict the West Indies to 150-9 in reply to its 166-7 on Sunday June 27, 2021

The match stayed alive until the final over, thanks to a superb rearguard innings from Fabian Allen whose 34 runs from 12 balls included five sixes.

The West Indies came to the final over bowled by Lungi Ngidi needing 36 runs to win — six sixes. Allen raised their hopes with maximums off the first two balls. After a dot ball, a wide kept their faint chances alive. A third six from Allen created the possibility of an extraordinary finish but he was trapped lbw next ball and South Africa held on.

At first, Sunday’s match seemed to be eerily similar to the first match of the series at the same venue. South Africa again lost the toss, was sent in and its batting performance followed the pattern of the day before when it made 160-6 in an innings which started well, then faltered.

On Sunday, Reeza Hendricks (42) and Quinton de Kock (26) put on 73 for South Africa’s first wicket and captain Temba Bavuma made 46 from 33 balls to guide South Africa to 96-1 at the midpoint of its innings.

But the second half of the innings didn’t match the first and only two other batsmen, David Miller (11) and Heinrich Klaasen (10) reached double figures. The last four wickets produced only 27 runs.

Evin Lewis, whose match-winning 71 steered the West Indies to victory in the first match, started his innings Sunday in the same way he did a day earlier, with a six in the first over.

But the home side collapsed to 70-5 and the chase suddenly became formidable, the required run rate climbing at one point to 13.

The pitch was slower and turned more than a day earlier, bringing the South African spinners into the match. George Linde, who caused the ball to bounce and turn sharply, took 2-19.

"We had a hard look at ourselves (after the first match)," Linde said.

"We had a team chat this morning. We had to look at ourselves in the mirror.

"We know we could have done better yesterday and luckily today it worked out well for us.

"I felt the pitch was slower today and turned more. It bounced also and when that happens I’m always happy." The third T20 is on Tuesday.