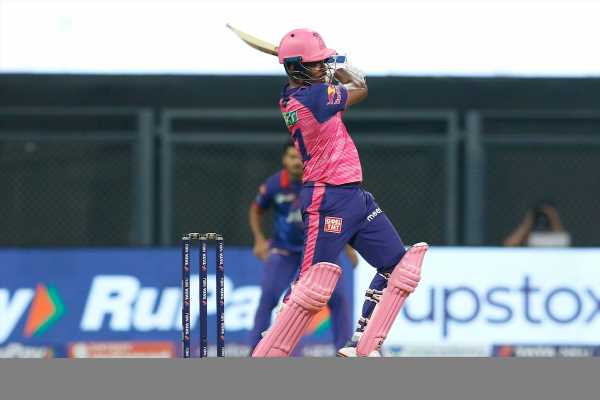 While aggregating 5035 runs in T20s, his tally in this IPL season is 201 runs from seven outings.

It was a day of milestones for Rajasthan Royals captain Sanju Samson when he stepped out to play against Delhi Capitals at the Wankhede Stadium in Mumbai on Friday.

The 27-year-old played his 100th match for the Royals and went on to complete 5000 runs in Twenty20 cricket.

When he walked in to bat in his 100th match Rajasthan Royals were 155 for 1 in 15.1 overs after the fall of Devdutt Padikkal’s wicket.

In 100 IPL games across eight seasons, Sanju, who is one of the strongest pillars in the Royals’ setup, has scored over 2500 runs.

He scored a blistering unbeaten 46 off 19 balls, which included five fours and three sixes, while aggregating 5035 runs in T20s. His tally in this IPL season is 201 runs from seven outings.

Opener Jos Buttler registered his third century in IPL 2022 to power Rajasthan Royals to a 15-run victory in a drama-filled match.

The victory took the Royals to the top of the 10-team table with 10 points from seven matches.

Buttler, who blasted 116 off 65 balls, with the help of nine boundaries and as many hits over the fence, and Devdutt Padikkal shared a 155-run stand for the opening wicket to help the Royals post 222 for 2, this season’s highest total, after being put in bat.

In reply, Delhi Capitals could only muster 207 for 8.