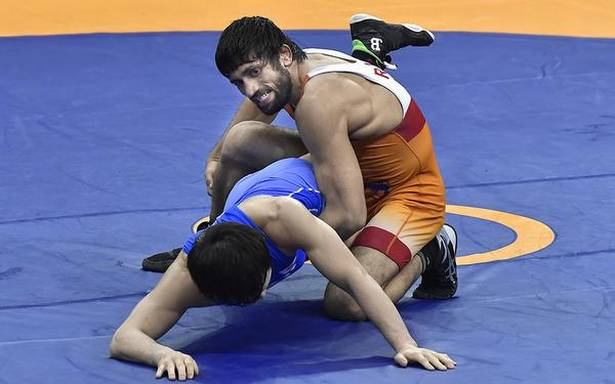 Dahiya defeated Iranian Alireza Nosratolah Sarlak 9-4 to retain his 57kg freestyle title, which he had won in front of his home crowd in Delhi last year.

Yogeshwar Dutt and Bajrang Punia were the other wrestlers to have claimed two Asian crowns but none had won it in consecutive years. Dahiya, an Olympic-bound wrestler, got the better of Uzbek Nodirjon Safarov 9-2 and Palestinian Ali Aburumaila 11-0 in quarterfinals and semifinals respectively to book a spot in the gold-medal match.

“The championship is not at the highest level so I was just trying to be relaxed.

“I am wrestling after four months, so I was just keeping it simple,” Dahiya told www.unitedworldwrestling.org

The much-anticipated 65kg summit clash between three-time Worlds medallist Bajrang Punia and defending champion and former World champion Takuto Otoguro of Japan ended on a disappointing note as the Indian pulled out due to an injury and settled for a silver medal, his third silver and seventh continental medal.

Bajrang got past Yongseok Jeong of Korea 3-0 and Bilguun Sarmandakh of Mongolia 7-0 in quarterfinals and semifinals respectively to reach the final.