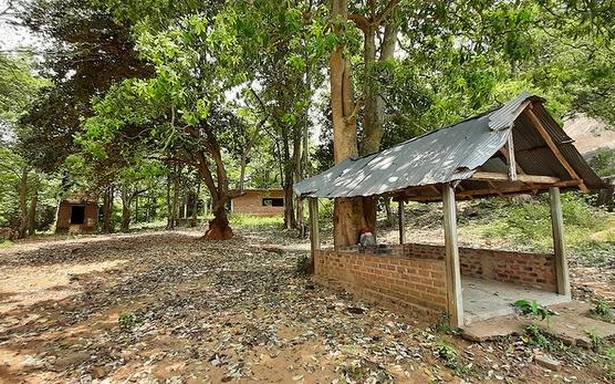 Over the last few months, farmers of Mavadi Odai in Sri Lanka’s eastern Batticaloa district frequently spotted something crop up on their land overnight — a border stone they had not planted.

“The Forest Department people come and put their stones when we are asleep, and then claim the land to be theirs,” says Marimuthu Raveendrakumar, 51, speaking of a growing insecurity among residents over land that they returned to only in recent years, after years of displacement during the civil war. According to many in Batticaloa, the land where Tamil communities have resided and farmed for generations, is increasingly under threat from different governmental bodies that oversee agriculture, conservation and archaeology.

The 36 Tamil families in Mr. Raveendrakumar’s village which lacks motorable roads — it takes over 45 minutes to cover a 3-km stretch to reach here — do small-scale farming for a living. A plot of land is all they have assuring them of a livelihood. A majority owns under 5 acres. “But every day, the Forest Department is claiming a new patch of land here to be theirs,” he says.

The government’s forest conservation efforts come alongside growing criticism over the Rajapaksa administration over its environmental policy that activists view as being “destructive”.

Apart from tackling the Forest Department’s moves, the people of Mavadi Odai constantly dread wild elephants, and more recently, powerful humans eyeing their natural resources. Not far from their homes, a rapid sand mining operation has begun, with huge machines extracting truckloads of sand on a daily basis, villagers note. Following the intervention of local MPs, district authorities ordered that it be paused.

Locals have not been able to obtain permission to mine sand in the resource-rich area. “We would be far more careful and not mine as deep as them, because we know our terrain, we know how our village gets flooded every monsoon,” says a farmer. Some of them work as labourers in the sand mines, earning a daily wage of LKR 700 to 1,000 (about ₹385) that could prove precious in the face of an acute job scarcity.

“The mining companies exploit the villagers’ poverty, get cheap labour, and make huge profits selling the sand. They don’t care about how that damages the environment here,” says Kanapathypillai Mohan, who heads ‘Thamizh Unarvaalargal’, a locally-run organisation that “stands up for Tamil people’s rights”.

“We had seen sand mafias only in films, but here we see them in action right in front of our eyes, that too with the blessings of some prominent local politicians aligned to the Rajapaksa government,” he alleges.

Admitting that sand mining is going on in a “drastic manner” in the province, Anuradha Yahampath, Governor of the Eastern Province, says the Geological Department takes “all factors into consideration” while issuing licences, but some who obtain the licence are “violating” the conditions.

Asked about allegations of the Forest Department taking over agriculture land, the Governor, the highest official in the Province appointed by and representing the President, said in some instances, land is being freshly demarcated to indicate forest areas. “There are some other cases where people have encroached into forest areas, and we are looking at alternative lands that can be offered to them. It is very important that we provide agricultural land to our people, and at the same time, protect our forests,” Ms. Yahampath says, adding that a “strong environmental committee” headed by the Governor, with members of the Navy, Army and special task force, is looking into the concerns over land, “the biggest issue” in the Province.

The government’s efforts are yet to inspire confidence among the people, going by their accounts. In fact, land-related conflicts in Batticaloa have escalated after President Gotabaya Rajapaksa came to power, they note.

Livestock farmers in Mayilathamadu, about 70 km from town, have been agitating for months, against colonies of Sinhalese agricultural families, set up reportedly by the country’s Mahaweli authority that administers land and irrigation, on fields their cattle have been grazing for decades. Like some other farmers’ organisations and residents in the civil war-affected north and east, they too have recently filed a case, accusing governmental departments of taking control of their lands in the pretext of expanding forest cover, boosting domestic agriculture — in some areas involving the Civil Defence Force — or carrying out archaeological investigations, according to Jaffna parliamentarian M.A. Sumanthiran, a senior lawyer appearing for them. At least a dozen such cases have been filed in the last year.

Further, six months into office, President Rajapaksa set up a task force for Archaeological Heritage Management in the Eastern Province last June that has emerged another source of apprehension for Tamils. The panel, with only majority Sinhalese members — including senior Buddhist monks — has taken steps that Tamils fear, will threaten their places of worship, like the Kusalanamalai Kumaran temple in Batticaloa. The stones placed by the Archaeology Department around the shrine have already made temple administrators nervous. “The motive appears to assert Buddhism in these traditional Tamil areas,” says an office bearer, requesting anonymity.

The Tamil-majority district is flanked by Trincomalee and Ampara, that together make the multi-ethnic Eastern Province that has been home to Tamils, a sizeable Muslim population who are also Tamil speaking, and a smaller proportion of Sinhalese. The clamour for land from different agencies, according to Batticaloa parliamentarian Shanakiyan Rasamanickam, is not a coincidence, but has a more sinister motive. “It is nothing but a systematic effort to change the demographics of the Tamil-majority areas.”

Pointing to past moves by “majoritarian governments” in post-Independence Sri Lanka, of “settling” Sinhalese people in Tamil-speaking areas, the MP said: “We are only seeing similar attempts now. And they are happening at an accelerated pace after the Rajapaksas returned to power.”