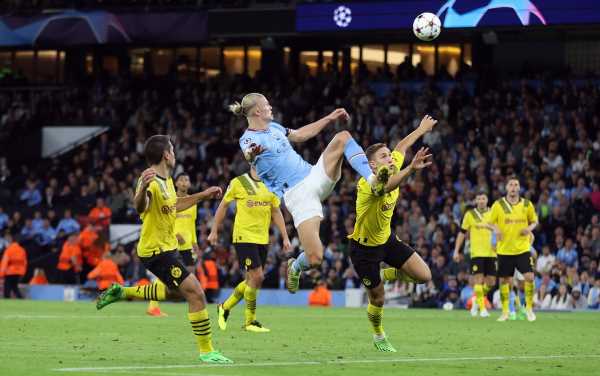 A round-up of Wednesday’s action in the UEFA Champions League.

Erling Haaland grabbed an 84th-minute winner against his former club Borussia Dortmund as Manchester City came from behind with two late goals to seal a 2-1 win in Champions League Group G on Wednesday.

The Norwegian has now scored 13 goals in eight games since making his move from the Bundesliga club and his latest was a brilliant finish as he leapt to guide home a wonderful cross with the outside of his boot by Joao Cancelo.

There was something inevitable about the 22-year-old, who scored 86 goals in 89 appearances for Dortmund, deciding the outcome but it was a surprise how much City had struggled for almost an hour.

Pep Guardiola opted to rotate his squad a little and his players struggled to find their usual tempo and fluency in a dull opening 45 minutes.

The German defence had coped with City’s pedestrian build-up play with neither Jack Grealish or Riyad Mahrez getting much joy on the wings.

The first real chance came in the 52nd minute and it fell to Dortmund with Marco Reus bustling in from the left but he scooped his shot wide of the far post. Reus was more accurate, though, four minutes later when a corner reached him at the back of the penalty area and he whipped a ball back into the box for England international Jude Bellingham to head past Ederson.

Guardiola had been preparing a triple change when the goal was scored and he soon introduced Bernardo Silva, Phil Foden and Julian Alvarez.

The trio provided the desired impact — adding the missing pace and inventiveness to City’s forward play but when they drew level in the 80th minute it was thanks to a defender.

Kevin De Bruyne played the ball inside to John Stones who blasted a fierce drive past Alexander Meyer from outside the box.

The momentum was with City and all Dortmund’s efforts to neutralise Haaland counted for nothing when Cancelo produced his magical cross and the Norwegian twisted his body in the air and used the outside of his left foot to steer the ball home.

City, who won their opening group game against Sevilla 4-0, top the standings on six points, three ahead of the Germans. Battling Salzburg held a disjointed Chelsea to a 1-1 draw, severely denting the 2021 winners’ chances of qualifying from Group E.

Raheem Sterling put the London side ahead in the 48th minute, latching on to a low cross from Mason Mount and shooting beyond the diving Philipp Kohn into the left corner of his net.

It was his first Champions League goal in Chelsea colours and the first goal under new coach Graham Potter, who took over last week following the shock dismissal of Thomas Tuchel.

But the well-organised Salzburg side, who also drew with AC Milan last week, ran tirelessly and were rewarded in the 75th minute when Noah Okafor sent a low cross home after Cesar Azpilicueta and Thiago Silva had failed to clear the ball.

Former Brighton & Hove Albion boss Potter said he was disappointed with the result “but the boys gave everything. It’s impossible to control the game for 90 minutes and the period we didn’t do so well they scored.

“It’s always irritating when you concede but the overall defensive performance was good. Little details you have to improve. Not the result we wanted but we will take the point.”

Chelsea held Salzburg in their own half for long periods but failed to find the telling final pass. New signing Pierre-Emerick Aubameyang could not get on the end of a series of crosses and Kai Havertz often looked isolated.

Chelsea lost their first group game to Dinamo Zagreb last week and Tuchel was sacked the following day. On Wednesday, the crowd chanted Tuchel’s name and applauded at the 21st minute of the match in recognition of the 2021 title when Chelsea beat Manchester City in the final in Porto.

Chelsea, who followed that triumph with victory in the World Club Cup earlier this year and were favourites to qualify from Group E, now languish at the bottom of the group with one point.