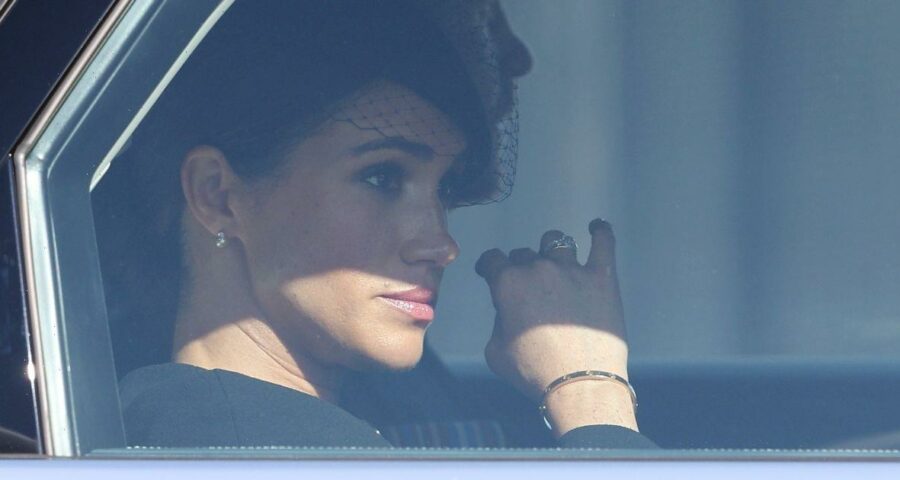 Meghan Markle and Kate Middleton looked sombre as they supported their grieving husbands at the Queen's coffin procession through central London on Wednesday afternoon.

The coffin of the late Queen Elizabeth II, who died on 8 September, was moved from Buckingham Palace at the highly significant time of 2.22pm to Westminster Hall where it will lie-in-state for members of the public to pay their respects until Monday 19 September, the day of the late monarch's funeral.

The Queen's coffin was followed on foot by her four children, King Charles III, 73, Princess Anne, 72, Prince Andrew, 62, and Prince Edward, 58, as well as her grandsons, Prince William, 40, and Prince Harry, 37, – who walked side-by-side – and Peter Phillips, 44, who is the son of Princess Anne.

For all of the latest updates, sign up for OK!'s Royal newsletter .

Members of the royal family, including King Charles, Prince William, Prince Harry and their wives, Camila Queen Consort, Kate and Meghan, then attended a service for the reception of Her Majesty the Queen's coffin at Westminster Hall before the lying-in-state begins.

During the service, Prince Harry was seen wiping his eyes as he appeared to lose composure during an emotional moment.

While Meghan, who paid a subtle tribute to the Queen by wearing earrings given to her by the late monarch, and Kate both looked sombre.

During the service, the senior royals stood in formation facing the coffin on its purple-covered catafalque, which was flanked with a tall, yellow flickering candle at each corner of the wide scarlet platform.

The King and Queen Consort stood together a metre or so apart, with the Princess Royal and Vice Admiral Sir Tim Laurence behind them, then the Duke of York alone, and in the next row the Earl and Countess of Wessex.

Behind them were the Prince and Princess of Wales, with the Duke of Sussex behind William, and the Duchess of Sussex directly behind Kate. The Cross of Westminster was placed at the head of the coffin.

This 100 page tribute looks back at the life of our most beloved monarch, Queen Elizabeth II, marking key events during her remarkable 70-year reign, as well as her childhood as a young princess, her enduring love for Prince Philip and her family, and the lasting legacy she leaves our nation.

This edition is available to buy in stores now or it can be purchased online here.

The Duke and Duchess of Sussex held hands as they moved through Westminster Hall at the end of the service while cries of "God save the King" could be heard as the King and the Queen Consort left the building.

While Meghan was also seen wiping a tear as she drove from Westminster Hall with Harry following the emotional service.

The Queen's coffin was driven to Buckingham Palace last night after being flown from Edinburgh where the Queen had been lying-in-state at St Giles' Cathedral in the Scottish capital, after the late monarch died at Balmoral Castle in Aberdeenshire.