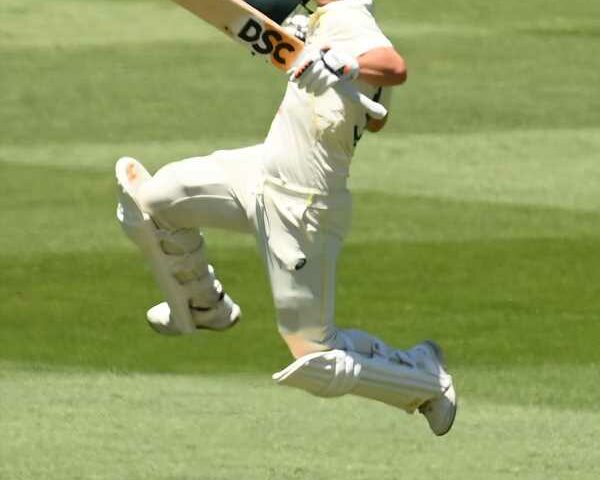 Images from Day 2 of the second Test between Australia and South Africa at the Melbourne Cricket Ground on Tuesday. David Warner returned to form with a half-century in his 100th Test but also ran out Marnus Labuschagne on Tuesday as Australia trimmed South Africa’s lead to 53 runs with eight wickets in hand at lunch on day two of the second Test.

Australia were 136/2 in reply to South Africa’s first innings 189 with Warner 86 not out and Steve Smith on 21 on a hot day at the Melbourne Cricket Ground.

The hosts lead the three-match series 1-0 after winning the opener in Brisbane by six wickets.

After Australia resumed on 45/1, opener Warner and Labuschagne (14) cruised to a 54-run partnership before it ended with a run out.

On the cusp of his half-century, Warner pushed a quick single into the covers but then surprised his batting partner by calling for another run on an overthrow.

Labuschagne, who had run well past the stumps on the initial single, started back but then hesitated and was well short when Anrich Nortje threw down the stumps at the bowler’s end from close range.

Having run out South Africa captain Dean Elgar for 26 with a fine piece of fielding on day one, Labuschagne trudged off fuming, leaving Warner to mark his 35th half-century with scant celebration in the next over after a single off Kagiso Rabada.

The run out was all the luck South Africa had in the session.

Smith was dropped on nine by wicketkeeper Kyle Verreynne, who dived for a tough, one-handed chance down the leg-side when all-rounder Marco Jansen found Smith’s glove. South Africa burned a review trying to dismiss Smith lbw when Jansen sent a yorker thudding into his pads in the final minutes of the session.

Warner was rapped on the helmet by a Nortje short ball when on 47, the ball careening over Verreynne for four byes.

After Elgar turned to Keshav Maharaj late in the session, Warner brought up his 8,000th Test run with an all-run four off the spinner’s first ball.

Australia paceman Mitchell Starc was cleared to bowl after having treatment on the middle finger of his bowling hand after a fielding mishap on day one.