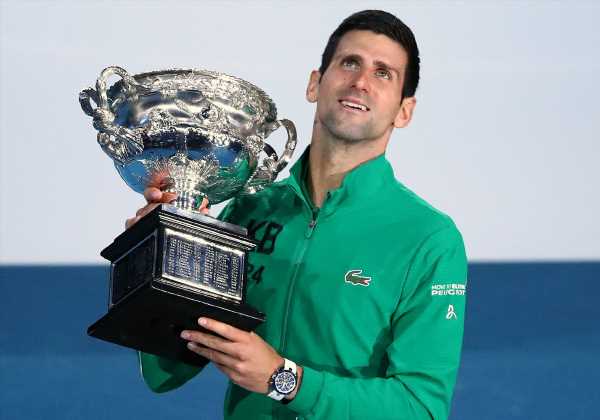 ‘Djokovic is an all-time great, but not essential’ Novak Djokovic did not receive any special treatment in getting an exemption from COVID-19 vaccination requirements to play at the Australian Open later this month, Tennis Australia and the Victorian state government said on Wednesday.

The world No. 1 announced on Tuesday he received an exemption to play in the Grand Slam tournament in Melbourne. Officials said he was one of a “handful” of successful applicants among 26 people who sought exemptions.

“I think lots of people in the Victorian community will find this to be a disappointing outcome,” acting Victorian Sports Minister Jaala Pulford told a media conference.

“But the process is the process; nobody has had special treatment. The process is incredibly robust. It’s de-identified and we are where we are, and so the tennis can begin.”

The decision to grant Djokovic an exemption sparked sharp criticism in Australia, where more than 90% of people over 16 have had two vaccine doses against COVID-19.

Melbourne had the world’s longest cumulative lockdown to contain COVID, and an outbreak of the Omicron variant has sent case numbers to record levels.

Tennis Australia CEO Craig Tiley said the two-stage application process was confidential and run by independent experts. All applications were assessed to ensure any exemptions met conditions set out by the Australian Technical Advisory Group on Immunisation (ATAGI).

The Serbian, who had declined to reveal his vaccination status, said previously that he was unsure whether he would compete at the Jan. 17-30 tournament in Melbourne due to concerns over Australia’s quarantine rules. “

“We completely understand and empathise with … people being upset about the fact that Novak has come in because of his statements over the past couple of years around vaccination,” Tiley told reporters.

“However it is ultimately up to him to discuss with the public his condition, if he chooses to do that, and the reasons why he received an exemption.

Earlier, seven-time Grand Slam doubles champion Jamie Murray was among those to question the decision to grant Djokovic a medical exemption from getting vaccinated against COVID-19 in order to compete at the Australian Open.

Murray said it would have been difficult for him to get a similar exemption if he were in the Serbian’s place.

“I mean, I don’t know what to say about that really… I think if it was me that wasn’t vaccinated I wouldn’t be getting an exemption,” the Briton said during the ATP Cup in Sydney.

“But well done to him for getting clear to come to Australia and compete.”

Paul Annacone, a former coach to Roger Federer and Pete Sampras, said it was his understanding that applications for medical exemptions were done anonymously.

“The two panels it goes through do not know who the person is, they just look at the symptoms,” Annacone said on the Tennis Channel.

“If that integrity is upheld, then what’s done is done. But there’s going to be a lot of questions asked.”

Annacone said Djokovic should still expect some tension from tennis fans in Australia, who have had to endure multiple lockdowns due to COVID-19 over the past two years.

“But Novak Djokovic is pretty good when there’s a little bit of antagonism going on,” he said.

American player Taylor Townsend said the crowds would come around once they saw Djokovic in action.

“When he steps out on the court and he starts to display what he does well, which is play amazing tennis and entertain, I think that they are going to be very happy,” she said.

Britain’s captain at the ATP Cup Liam Broady said that there was no option but to trust that Djokovic had a valid reason to seek an exemption.

The decision, however, was condemned by journalists and former athletes in Australia.

Melbourne-based broadcaster Andy Maher said: “Djokovic is an all-time great, but not essential.”

Former Australian Rules player Corey McKernan tweeted: “People with loved ones who are dying/some needing urgent treatment cannot get into their own states. You tell people they can’t go to Coles or a cafe without being vaxxed but if you’re world number one you get a pass?”

Victory at the Australian Open, which gets underway on Jan. 17, will give Djokovic his 21st major title, one more than the joint-record he shares with Roger Federer and Rafa Nadal.