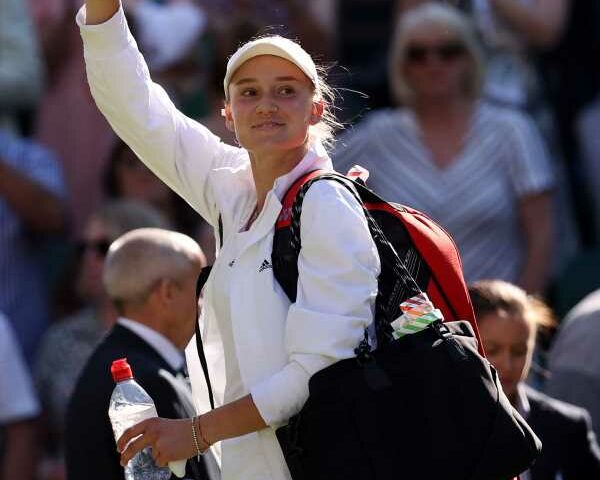 Russians scoffed at Wimbledon’s efforts to keep their compatriots out of the tournament after Moscow-born Elena Rybakina became the first player representing Kazakhstan to reach a Grand Slam final.

Wimbledon barred all Russian and Belarusian players from this year’s championships due to Moscow’s invasion of Ukraine, a decision that was condemned by the men’s and women’s tours as well as a string of top players.

Rybakina, who represented Russia until 2018, unexpectedly filled the void left by their absence from the tournament, with some Russians claiming the 23-year-old as their own.

In a final of firsts, Russians have a clear favourite. Shamil Tarpischev, president of the Russian Tennis Federation, congratulated Rybakina on reaching the Wimbledon final and insisted Russia had something to do with her success.

“It’s great that Elena is in the Wimbledon final. She is our product,” RIA news agency quoted Tarpischev as saying.

“Of course we will cheer for her.”

Russian and Belarusian tennis players are still allowed to compete on the Association of Tennis Professionals (ATP) and Women’s Tennis Association (WTA) tours, but can no longer compete under their countries’ names or flags.

“Our tennis player has ridiculed those who initiated the sanctions against Russians,” a sports blogger who identified himself as Alexei wrote.

“Wimbledon could not have done without Russian-born tennis players. But organisers just couldn’t ban every athlete with ties to our country.”

“Wimbledon didn’t want Kate (Middleton) to award the trophy to some tennis players, so they let Rybakina — who represented you know which country until 2018 — into the final,” one Russian Twitter user wrote.

“I guess she is allowed to be awarded a trophy.”