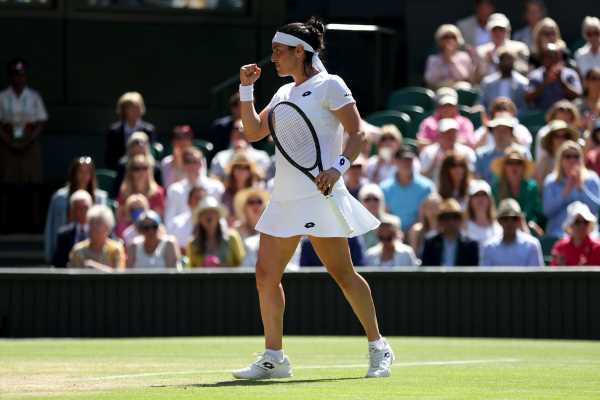 Tunisia’s Ons Jabeur created history as she became the first Arab and first African woman to reach the Wimbledon final with a rousing 6-2, 3-6, 6-1 victory over her close friend Tatjana Maria on Thursday.

World No 2 Jabeur will take on Russian-born Kazakh Elena Rybakina in the final.

Jabeur started off in smashing fashion in the semi-final against 34-year-old Maria, who had become the first mother of two in a Wimbledon semi-final since Margaret Court in 1975.

The Tunisian broke her opponent’s serve in the third and seventh games to clinch the set 6-2.

However, the 103rd-ranked Maria bounced back strongly in the second set, as as she broke for a 3-1 lead in the second and held on to that advantage to draw level when the third seed sliced a backhand into the net.

Jabeu, the highest-ranked African and Arab tennis player in history, raised her game when it mattered the most as she ran away with the third set 6-1 to register the most important point of her career to date.

Jabeur has been a trailblazer for her region throughout her career, last year becoming the first Arab player to win a WTA title, the first to crack the top 10 and the first to reach the quarter-finals at Wimbledon.

Until this week, 27-year-old Jabeur never gone past the last eight at a Grand Slam.

Jabeur, who is known as the ‘Minister of Happiness’ back home in Tunisia, is hoping she can live up to that moniker by becoming the first African woman to win a Grand Slam singles title — and where better to achieve that feat than Wimbledon.

A look at Jabeur’s smashing run to the final:

Having risen to a career-high world ranking of second, Jabeur entered Wimbledon as one of favourites for the title, having lifted a WTA 500 trophy in Berlin on the same surface two weeks ago. Jabeur was off the blocks quickly at Wimbledon as she demolished qualifier Mirjam Bjorklund of Sweden 6-1, 6-3 in the opening round match in just 53 minutes.

She continued her strong run on grass to reach the third round at Wimbledon with an easy 6-4 6-0 victory against qualifier Katarzyna Kawa of Poland in the second round. Coming into the second-round contest with a 2-0 head-to-head record against 29-year-old Kawa, ranked 91st, Jabeur played aggressively from the start, mixing strong groundstrokes with deft drop shots to dominate from the baseline. Jabeur continued to grow stronger with every outing at Wimbledon. She despatched former junior number one Diane Parry 6-2, 6-3 in straight sets to reach the fourth round. Jabeur’s first real test came against Belgian Elise Mertens, whom she edged out in a topsy-turvy encounter to reach the Wimbledon quarter-finals for the second year running.

She claimed a hardearned 7-6(9) 6-4 victory to reach the last eight without dropping a set.

Mertens was no pushover during the thrilling fourth round contest as she twice came back from a break down in the first set and earned five set points during the marathon tiebreak.

But once Jabeur produced the firepower to wriggle out of trouble, she raised her game in the second set and wrapped up the win when Mertens surrendered with a double fault. Jabeur, the highest surviving seed in the women’s draw, recovered from losing her first set at this year’s Wimbledon to beat Czech Marie Bouzkova 3-6, 6-1, 6-1 to advance to her maiden Grand Slam semi-final.

She used plenty of drop shots in the opening stages of the first set against Bouzkova, but the 23-year-old Czech read them well to blunt one of the Tunisian’s main weapons.

Jabeur failed to find a way past the Czech’s stoic defence as Bouzkova chased down most of her groundstrokes and was rewarded with a break of serve in the fifth game. A second break in the ninth got her the opening set.

Having lost her first set in the tournament seemed to wake up Jabeur who stepped up her aggression, started hitting her groundstrokes flatter and broke Bouzkova’s first service game of the second set.

A second and a third break followed and the Tunisian soon levelled the match as her favourite drop shots once again found the mark on the lush green lawns.

Jabeur had won eight straight games to jump into a 4-0 lead before the Czech halted the juggernaut with a break to get on board in the third set. However, it proved to be only a minor hiccup for Jabeur who picked up another break in the next game and then held serve to love to seal the contest on her first match point.

‘I’m a proud Tunisian woman standing here today — I know in Tunisia they are going crazy right now,’ said the third seed after winning her semi-final match against Maria.

‘I just try to inspire as much as I can — I want to see more Arab and African players on the tour, I love the game and I want to share the experience with them. I saw some juniors playing out there and I hope to see them out here on Centre Court one day.’