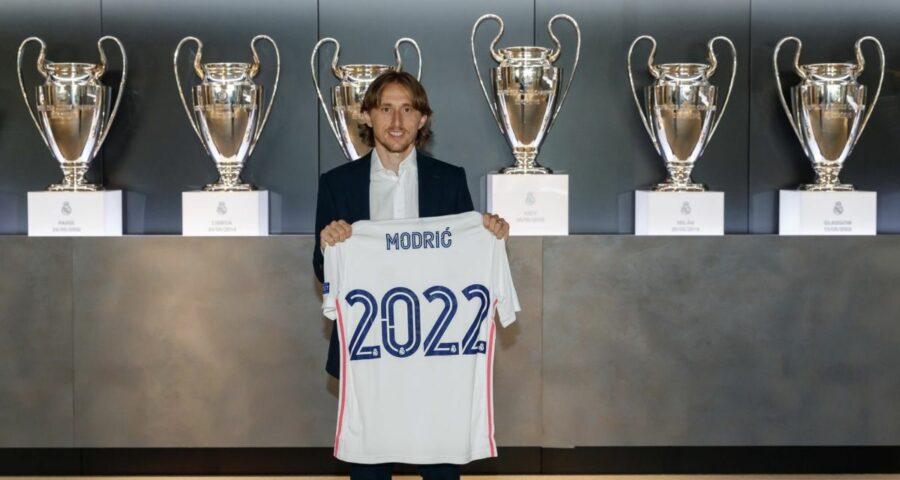 Real Madrid midfielder Luka Modric has signed an extension to his contract until June 2022, the Spanish side said on Tuesday.

Croatia international Modric’s contract was due to expire at the end of next month but he signed a new deal alongside Real president Florentino Perez.

“I’m proud and happy to keep wearing the shirt of the best club in the world,” Modric, 35, said on Twitter.

Modric, who joined Real from Tottenham Hotspur in 2012 for around 40 million euros, was one of Real’s top performers in an overall disappointing season in which they lost out on the La Liga title to city rivals Atletico Madrid and were beaten in the Champions League semi-finals by Chelsea.

Modric, who will represent Croatia at the European Championship, was one of several high-profile Real players to run down their contract.

Winger Lucas Vazquez and captain Sergio Ramos are both set to leave for free unless they sign extensions before June 30.

Former Bayern Munich coach Hansi Flick signed a two-year contract on Tuesday to take over Germany after the end the European Championship this summer, the German Football Association (DFB) said.

He will succeed current coach Joachim Loew, with whom he won the World Cup as an assistant in 2014 and will have to complete an overhaul that was disrupted by a string of bad results and the coronavirus pandemic.

“Everything happened surprisingly quickly for me and I am happy to be national team coach from the autumn,” Flick, who was the frontrunner for the post, said in a statement.

“My joy is great because I see the quality of the players, especially the young ones, in Germany. So we have every reason to approach the next tournaments, for example our home Euro 2024 with optimism.”

Germany will host the European Championship in 2024.

Flick led Bayern to six titles in the 2019/2020 season and also won this season’s Bundesliga crown after initially taking over as an interim coach in late 2019, but decided to leave the champions after 18 successful months in charge.

Loew, who had a contract until 2022, led Germany to the World Cup title in 2014 with Flick as his assistant, and also won the 2017 Confederations Cup.

But his team crashed out in the first round in the 2018 World Cup and has been struggling to perform at the highest level despite an overhaul.

A 6-0 thrashing by Spain in the Nations League in November was Germany’s worst defeat in competitive football.

The 56-year-old Flick has a long experience at the DFB, having been assistant coach from 2006-2014 and then taking over as sports director until 2017.

“He was from the start at the very top our my wish list,” Oliver Bierhoff, national team director, said. “I know the human and technical qualities of Hansi Flick and I appreciate them since our many successful years together in the national team.”

Spain-Portugal friendly to play out in front of fans

Around 20,000 spectators will be allowed to attend Spain’s friendly with Portugal in Madrid on June 4, authorities said on Tuesday, the first professional game to be held in the Spanish capital with a live audience for more than a year.

Atletico Madrid’s Wanda Metropolitano, which can hold 67,000 people, will be at about 30% capacity for the game due to COVID-19 restrictions.

The fixture with European Championship holders Portugal is the first of two friendlies Spain will play in the run-up to the rescheduled Euro 2020. They will host Lithuania on June 8 at the Estadio Butarque, also in Madrid.

They will play all three of their Group E games at Seville’s La Cartuja stadium, which will also be at 30% capacity.

Seville gained hosting rights in April after Bilbao was removed from UEFA’s list of host cities because it could not guarantee the accommodation of supporters for the tournament, which was postponed from last year due to the pandemic.

Czech coach Jaroslav Silhavy dropped former captain Borek Dockal from his Euro 2020 squad on Tuesday while leaving one spot open for Slavia Prague defender Ondrej Kudela, who is appealing a 10-match ban for racist behaviour in a Europa League match.

The Czechs, appearing in their seventh straight Euro finals, will have their work cut out to qualify from Group D, which also includes tournament favourites England and 2018 World Cup runners-up Croatia.

They already know they will have to start the tournament on June 14 in Glasgow against Scotland without injured Slavia midfielder Lukas Provod.

Silhavy told reporters that the June 1 deadline for squads to be submitted gave him leeway to await Kudela’s appeal:

“There’s probably not very much hope, but we don’t want to close the door.”

Glen Kamara of the Scottish champions Rangers complained of being racially abused by Kudela at the end of the second leg of their bad-tempered last-16 clash in March. Kudela has denied the allegation.

The Czechs will also hope West Ham midfielder Tomas Soucek can carry over his sparkling Premier League form to give them some chance of surviving the group stage.