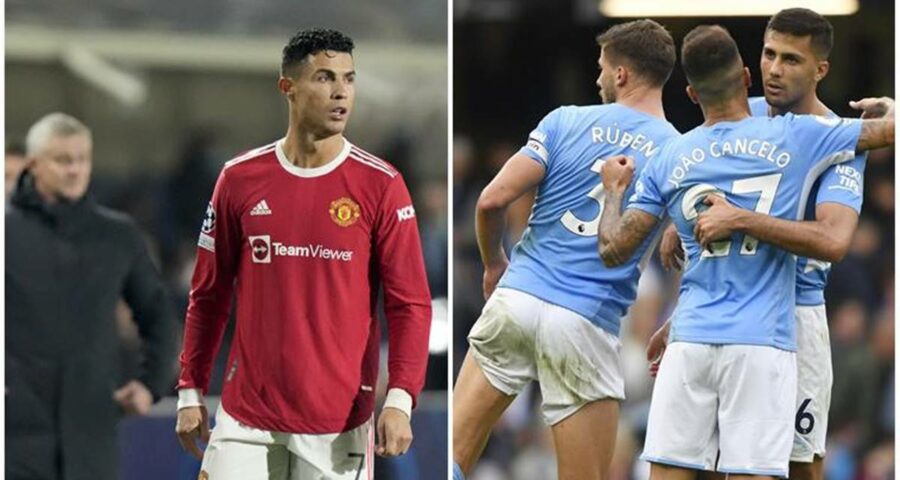 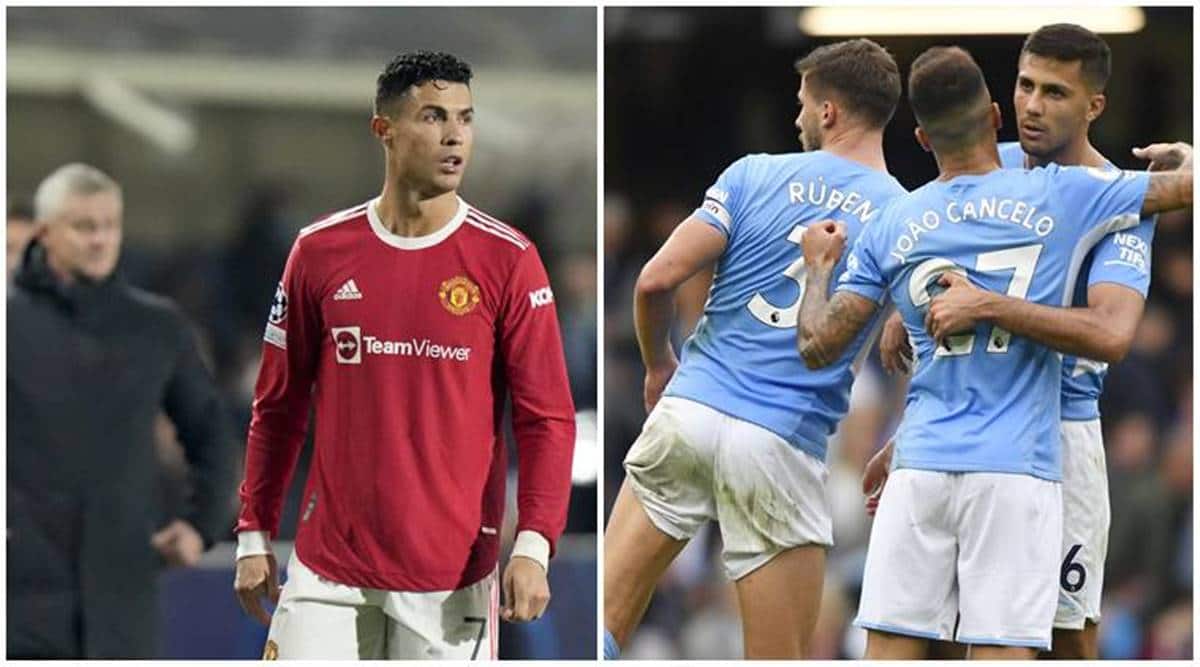 Manchester United vs Manchester City Live score Streaming Updates: Ole Gunnar Solskjaer likened Cristiano Ronaldo to Michael Jordan after the Portugal star bailed out Manchester United yet again this week in the Champions League. The United manager could use a bit of Phil Jackson — the “Zen master” former coach of the Chicago Bulls — when they host Manchester City on Saturday in the marquee matchup of weekend games in the English Premier League.

City visits Old Trafford coming off a 4-1 win over Club Brugge in the Champions League on Wednesday. Post-match, manager Pep Guardiola was already looking ahead to the derby — and Ronaldo.

United is in fifth place, eight points back of league leader Chelsea and three behind third-place City.

What a stop from David de Gea. The loose ball falls to Gabriel Jesus but DDG tips it over. Shambolic Man United defending before that to let Phil Foden in.

United build-up and Luke Shaw with the cross from the left-flank which finds Ronaldo in the box and he takes a first-time shot! WHAT A HIT! AND ON TARGET! But Ederson makes the save. This is the best from United so far! More shin than foot from Ronaldo.

This has echoes of the Liverpool game. Fernandes is ready to explode, leaving the position and throwing his arms around all the time.

De Bruyne gets a cross from the deep and it almost falls at the feet of Foden at the far post, but no harm done because it has gone for a goal kick. Bruno needs to get in the game for United, can’t keep giving the ball away.

De Bruyne chips looking for Foden just goes beyond him. City already started toying with United. Will it be a long afternoon for Manchester United?

Two fantastic crosses from Manchester City. Almost scored on the first. Eric Bailly puts the second into his own net. Manchester United’s defensive struggles continue. Do they change their gameplan now?

Manchester City have opened the scoring through an own goal from Manchester United’s Eric Bailly. Eric Bailly hits a dangerous Cancelo cross into his own net. Man Utd 0-1 Man City

City get the 186th Manchester derby underway … but only after the knee is taken, to more warm applause. Manchester United playing all defensive and guided attack is a significant issue to worry about. Manchester City remains favorites by a large margin. Silva cuts inside and takes a shot at the top-left corner but is wide!

Raphael Varane has a hamstring injury, Paul Pogba is still suspended, and Marcus Rashford drops to the bench. Back in: Victor Lindelof, Fred and Mason Greenwood. There’s no Edinson Cavani; he’s picked up a knock.

Solskjaer has won four and drawn one of his eight clashes with Guardiola. City, for their part, will be all too aware that they cannot afford to fall too far behind Chelsea and Liverpool in the title race and after a 4-1 win against Club Brugge in midweek will head across town in confident mood.

Worryingly for Solskjaer he will be without Varane for the visit of City after he suffered a hamstring injury against Atalanta and will be ruled out for up to a month. United will have plenty of defending to do against City and will have to do it well. But that, combined with swift counter-attacks, has generally been the blueprint for their success against their local rivals since Solskjaer took the helm.

City suffered a surprise home defeat by Crystal Palace last weekend and they have also lost three of their last four Premier League clashes against Solskjaer’s United. Such a poor recent record against their neighbours will not sit well with manager Pep Guardiola and there will be points to prove when the whistle blows at Old Trafford. United were hammered 5-0 by Liverpool in their last home game — one of the worst results in their recent history and one that whipped up a media frenzy about Solskjaer’s future.

A comfortable win at troubled Tottenham Hotspur and then a Cristiano Ronaldo-inspired escape from defeat at the hands of Atalanta have taken some of the heat off under-pressure Manchester United manager Ole Gunnar Solskjaer. But a more severe test of his side’s health will come this Saturday when they host Premier League champions Manchester City in the derby — a game fraught with danger for a United side that has been wildly unpredictable this season. 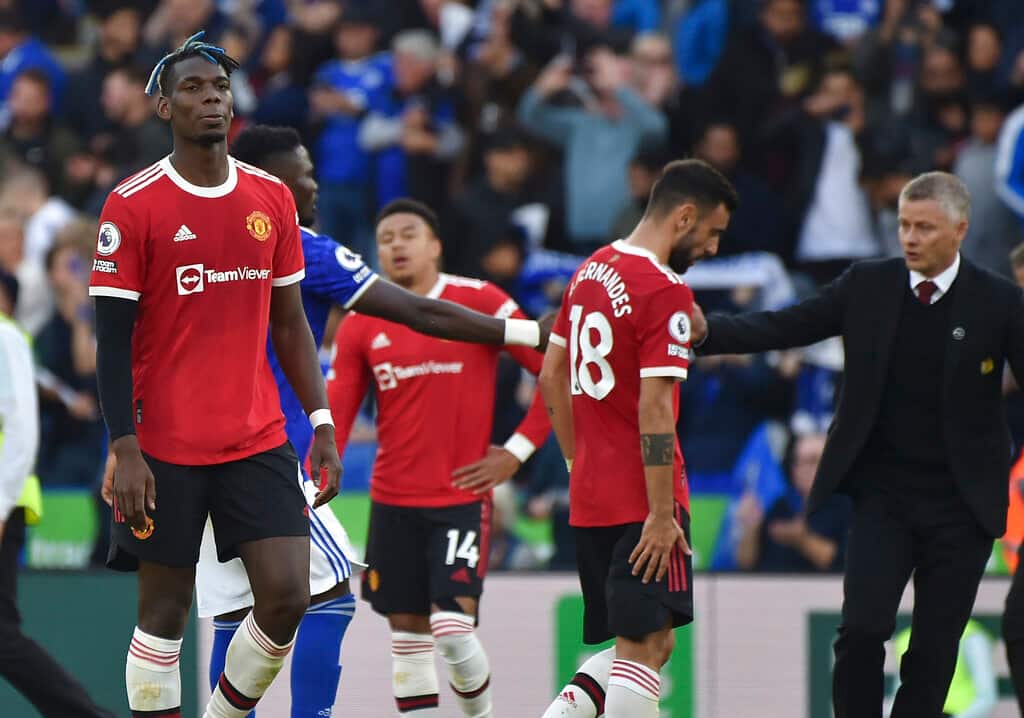 Manchester United boss Ole Gunnar Solskjaer has won four of his eight meetings with Guardiola in all competitions, with the Spaniard saying that the addition of Portugal forward Cristiano Ronaldo had made the opposition stronger. City travel to Old Trafford in the Premier League on Saturday, with Guardiola’s side three points ahead of their rivals after 10 games.