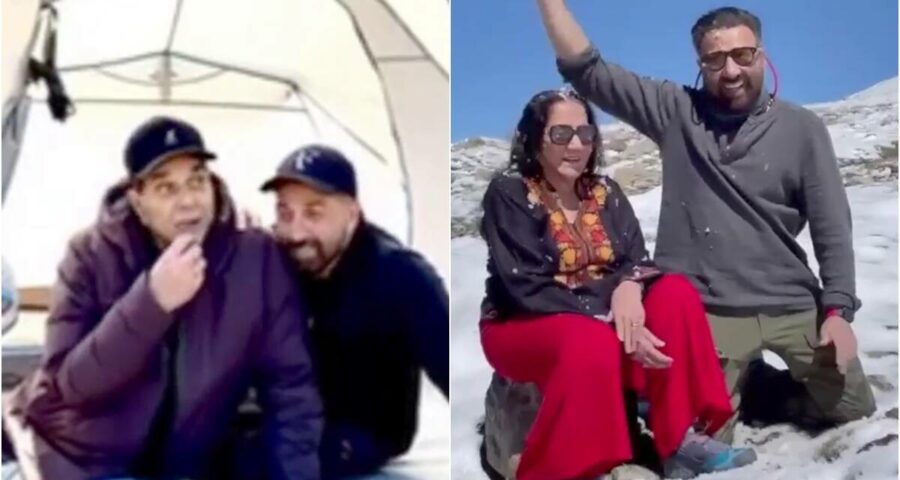 Sunny Deol gave a glimpse of his camping trip with father Dharmendra at 9000 feet. The video came weeks after he shared a glimpse of his vacation with mother Prakash Kaur as the two played in the snow. Veteran actor Dharmendra has called Sunny Deol a “darling son” as the two camp at a height of 9000 feet. In a new video posted by the Sunny, one can see the father-son duo sitting inside a tent as Dharmendra says that’s the life one should lead as he thanked God and fans for blessing him.

In the video, Sunny is sitting next to Dharmendra smiling at the camera. The Bollywood legend says, “Enjoying ourselves at the height of 9000 I think. One should live like this. I love you all. It’s all his (God) blessing and your good wishes,” Sunny wrote in his caption, “Just the 2 of us. Building castles in the sky. Just the 2 of us. #fatherson.” The video comes weeks after Sunny had shared a video as he played in the snow with his mother Prakash Kaur.

Sunny and his younger brother Bobby Deol had last month wished their mother Prakash Kaur on her birthday. Prakash who rarely makes appearances, was seen smiling with her two sons in the clicks posted by the two Deols on Instagram.

Earlier, a video of Sunny with Prakash Kaur went viral on social media too. In the video, Sunny, who accompanied Prakash to the Mumbai airport, was walking behind his mother. He was seen lifting her dupatta as it touched the ground and put it on her shoulder. The small gesture received overwhelming response from his fans.

In another video while on the vacation, he was seen playing in the snow with Prakash Kaur. “Hum jitne bhi bade ho jayein inke liye to hum bachche hi rahenge. Mata pita ka pyar hi ek anmol aur saccha pyaar hai, inki kadra karein. Yeh lamha meri yadgar lamhon me se ek hai jaha maine apne maa ke saath apne bachpan ko fir se mehsoos kiya. (No matter how old we get, we remain kids for our parents. Parents’ love is the only true and priceless love, respect it. This is one of my most memorable moments where I got to relive my childhood with my mom.) #parentslove #mothersonlove #vacationvibes,” the actor wrote.