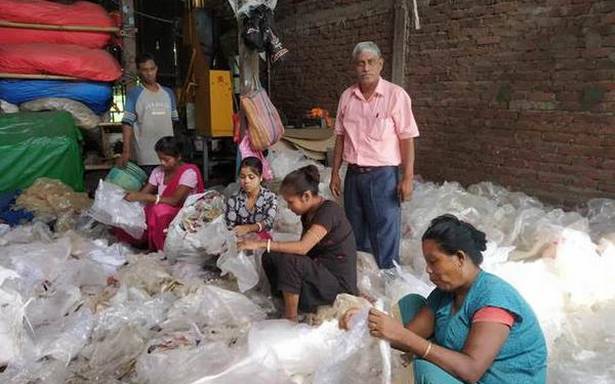 The waste-based projects won €10,000 and six months of mentoring

Two waste-based projects in Assam have won an international award for taking their businesses to a higher, greener level.

Shree Guru Plastics and Inside Out, two enterprises based in Guwahati, won €10,000 and six months of business mentoring to help make their ideas a reality.

They were among the 100 entries from across the world for a zero waste city challenge organised by WasteAid, a U.K.-based international NGO between April and July.

While Shree Guru Plastics, founded by Dilip Das, has been recycling post consumer low-value plastics in Guwahati for a decade now, Inside Out formed by the Rupankar Bhattacharjee and Aniket Dhar has ventured into making paper out of water hyacinth, which is considered the most troublesome weed on earth.

“We have been collecting low-value contaminated plastic and recycling them to produce thin film used in the construction industry. Our facility processes 11 tonnes of plastics a month and with the seed funding from WasteAid, we hope to increase the capacity to 19 tonnes a month,” Mr. Das said.

His firm currently employs 13 women in processing and seven ragpickers for collection. The expansion is expected to generate employment for 15 more women.

“Our weed-to-paper project aims at reducing the need for wood pulp and will provide employment to 23 local people, including semi-skilled labourers and unskilled labourers for waste collection,” Mr. Bhattacharjee said.

Water hyacinths are a major ecological worry in wetland-rich Assam.

“We are excited to support these entrepreneurs and to help develop sustainable resource management in Guwahati by improving recycling rates for low-value plastics and turning ecological waste into valuable products,” Dinesh Bandela, WasteAid’s project manager for India said.

According to the NGO, the prize money will be used to grow local circular economy businesses in Guwahati, where only 10% of the waste generated is recycled.

The circular economy is a “model of production and consumption that involves sharing, leasing, reusing, repairing, refurbishing and recycling, existing materials and products for as long as possible” with the aim of tackling global challenges such as waste, pollution, climate change and biodiversity loss.