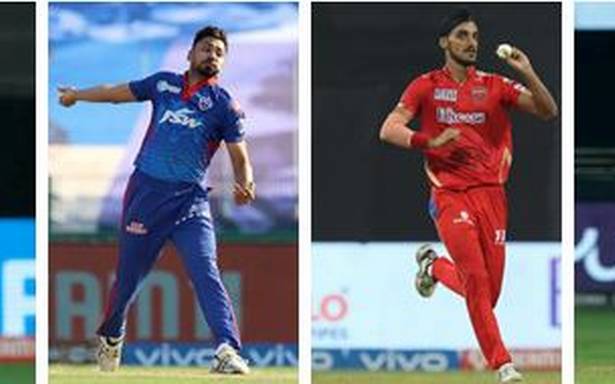 Harshal, Avesh, Arshdeep and Tyagi have made a mark in this edition

Scenario 1: The batter goes for the shot but the ball arrives later than he expects. The knuckle ball rattles woodwork.

Scenario 2: The batter lines himself up for the big blow, but the yorker goes under the bat quicker than he anticipates. It’s a well disguised faster delivery.

Scenario 3: The batter, hustled by the heavy ball, goes for the pull but finds the bouncer pacier than he had bargained for. The ball takes the top-edge for a catch. Some other batters succumb to the slow, craftily concealed, short ball.

Pace variations, smart changes in length, exploring different angles and mixing up the yorkers with the hard length balls and the short-pitched deliveries have fired unsung Indian pacemen to stunning success in the ongoing IPL.

And they have been, pitted against formidable names, swinging games big time.

The 30-year-old Harshal Patel’s story is fascinating. With 23 scalps in 10 games, he is miles ahead of the pack in this edition’s IPL.

He can strike early with his natural outswingers. And he is Virat Kohli’s go-to man at the death with his loopy slower deliveries and the surprisingly quick yorkers.

His ice-cool temperament is a major factor in tense situations. The hat-trick against Mumbai Indians on Sunday was well deserved.

Then we have the 24-year-old Avesh Khan from Madhya Pradesh. His 15 wickets in 10 matches at an economy rate of 7.55 show he can both contain and strike.

This paceman from the MRF Pace Foundation employs his shoulders, hit the bat hard. He also comprehends his release point for his on-target yorkers. And his short-pitched balls have zip.

He is calm, switches pace and length capably, and brings the left-armer’s angles into play. Arshdeep has roared for Punjab Kings.

And Rajasthan Royals’ Kartik Tyagi, with his high-arm action and lovely release, is a genuine talent.

The yorker outside the off-stump is bowled with precision. He has pace, variety, control, temperament and the ability to bowl in impossible situations like against Punjab Kings the other day.

Prasidh Krishna, quick and potent on his day, and left-armer Chetan Sakariya, a clever customer with a bag of tricks, both MRF products, have already represented India.

India has considerable bench strength in pace bowling. In the land of spin, these pace bowlers can sting.