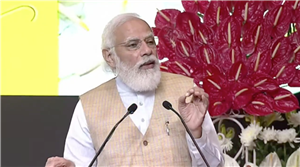 Unveiling the projects, Prime Minister Modi said that the goal of the updated Swachh Bharat Mission is to ensure cities are completely free of garbage. Unveiling the projects, Prime Minister Modi said that the goal of the updated Swachh Bharat Mission is to ensure cities are completely free of garbage. He added that the next phase of mission AMRUT will focus on increasing sewage and septic management, making cities ‘water-secure’, and ensuring that no sewage drains in rivers.

“The journey of Swachh Bharat Abhiyan and AMRUT Mission so far is really going to make every countryman proud,” PM Modi said. “In this there is mission, there is respect, there is dignity, there is also the ambition of a country and there is also unmatched love for the motherland.”

Today, India is processing about one lakh tonnes of waste everyday, the prime minister noted. In comparison, less than 20 per cent of the waste generated everyday was being processed when the campaign began in 2014. “ Today we are processing about 70 percent daily waste,” he said, adding that the goal was to take this figure to 100 per cent.

Encouraging the use of modern technology to help develop cities, he pointed out that the country’s new National Automobile Scrappage policy, introduced in August, strengthens “the campaign of Waste to Wealth, circular economy”.

He lauded the role of the youth in strengthening his flagship cleanliness campaign. “I am very happy that our today’s generation has taken the initiative to strengthen the cleanliness campaign. Toffee wrappers are no longer thrown on the ground, but kept in pockets,” he said. “Small children, now they interrupt the elders not to mess up.”

According to a statement released by the Prime Minister’s Office, SBM-U 2.0 will ensure grey and black water management in all cities, other than those covered under AMRUT. The mission will focus on source segregation of solid waste. The outlay of SBM-U 2.0 is around Rs 1.41 lakh crore.

AMRUT 2.0, meanwhile, aims to provide 100 per cent coverage of water supply to all households in around 4,700 urban local bodies by providing about 2.68 crore tap connections. “The Mission will promote data led governance in water management and Technology Sub-Mission to leverage latest global technologies and skills,” the statement read.