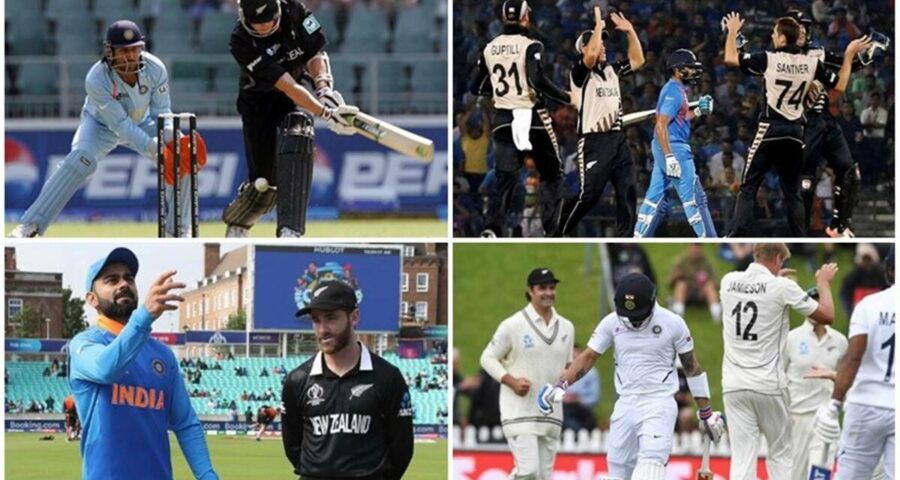 India have lost every match against New Zealand at ICC events since the 2003 World Cup. India and New Zealand will face each other in the final of the inaugural World Test Championship (WTC) from June 18. The second-ranked team India takes on the No.1 Test side New Zealand in the culmination of the two-year-long inaugural Test championship.

However, this is not the first ICC event where the two teams have locked horns against each other.

In the last five meetings between both teams in ICC tournaments, it is New Zealand who hold the edge with four wins out of five. India’s only victory was way back in the 2003 World Cup under Sourav Ganguly.

Since then India have lost every match to the Black Caps at ICC events. Here’s a rewind of those contests:

Ajay Jadeja’s 76 along with useful contribution by skipper Mohammad Azharuddin (30) and Robin Singh (27) took India to 251/ in 50 overs. In reply, New Zealand’s openers began at nearly five an over and chased down the total with 10 balls to spare with Matt Horne scoring 74 and Roger Twose remaining unbeaten on 60.

India’s pace trio of Javagal Srinath, Debasis Mohanty, and Venkatesh Prasad was economical but picked only three wickets among themselves.

Chris Cairns bettered Sourav Ganguly to steer New Zealand to victory over India in ICC KnockOut final. Cairns played through the pain of a dodgy right knee – he was only passed fit to play on Saturday – to produce a match-winning 102 not out. Batting first, India put up a fighting total of 264/6 led by Sourav Ganguly’s 117 and Sachin Tendulkar’s 69. But the Indian bowlers except for Venkatesh Prasad (3/27) were erratic and failed to defend the score.

Zaheer Khan’s superb spell of 4/42 blew away the Kiwis as they were bowled out of just 146. New Zealand top-order batting collapsed and a score of 146 was never going to be enough to trouble the Indian batting line-up. However, Shane Bond had India reeling at 21/3 but Rahul Dravid and Mohammad Kaif played sensible, solid cricket to take their side home.

A masterclass by Daniel Vettori along with a clinical display by the Kiwi batsmen set up a fine victory for New Zealand by 10 runs in this match. Batting first, New Zealand scored 190 with Brendon McCullum smashing 45 off 31 balls and Craig McMillan hitting a brisk 44 off 23 balls. In response, India was off to a rollicking start with 76 in 5 overs but with the dismissal of Virender Sehwag, the balance of the game shifted towards New Zealand. India was restricted at 180/9 in 20 overs as Vettori picked 4/20.

In a low-scoring encounter, India was skittled out for a paltry 79 chasing a target of 127 in 20 overs. On a pitch that was conducive to spin bowling the trio of R Ashwin, Suresh Raina and Harbhajan Singh spun a web around the Kiwis and restricted to a score of 126/7. None of the batsmen except Corey Anderson and Luke Ronchi got going.  However, New Zealand hit back with their own trio of Mitchell Santner, Ish Sodhi, and Nathan McCullum as the Black Caps won by 47 runs.

This was an Indian team that played under the leadership of Virat Kohli-led team. New Zealand batted first in the contest which was spread over two days due to inclement weather. Kane Williamson (67 off 95), Ross Taylor (74 off 90) were the architects in chief as the Kiwis ended with 239 on the board. Bhuvneshwar Kumar was the pick of the bowlers with 3/43. However, India’s batting fell apart in the run-chase as the Kiwi seamers wrecked havoc. Ravindra Jadeja’s 77 off 59 balls took India close to the target but they were ultimately short by 18 runs.

New Zealand and India met each other at the very first Men’s World Cup, with New Zealand coming out on top. New Zealand made it two from two against India in the 1979 edition of the World Cup. However, India did register a win in the 1987 edition. But once again it was the Kiwis who came up on top in the 1992 ODI World Cup.

In the two-match Test series in New Zealand in  2020 which was a part of the WTC cycle, India lost the first Test in Wellington by 10 wickets. Kohli’s India also India lost the second Test in Christchurch by seven wickets. The batting performance was barely up to the mark as 242 was the highest total put by the Indian lineup across two matches.