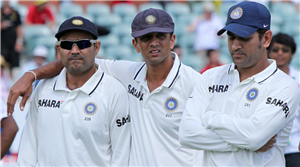 Virender Sehwag recalls an incident when Rahul Dravid had said some angry words to MS Dhoni.

Virender Sehwag has revealed an incident when Rahul Dravid had shown his anger — in real life and not on camera.

Speaking about the recent TV advertisement where Rahul Dravid’s ‘anger issues’ are seen while he is stuck in Bengaluru traffic, Sehwag, his former Indian teammate recalled an incident when Dravid had let loose a volley of angry words to MS Dhoni, who had been a newcomer in the team then.

Speaking on a Cricbuzz video, Sehwag tells Ashish Nehra: “I have seen Rahul Dravid get angry. When we were in Pakistan and MS Dhoni had been a newcomer, he played a shot and got caught at point. Dravid was very angry with MS Dhoni. ‘That’s the way you play? You should finish the game.’ I was myself taken aback by the storm of English from Dravid, I didn’t understand half of it.”

“But when MS Dhoni next came in to bat, I could see he was not hitting shots much. I went and asked him what was wrong. He said he did not want to be scolded by Dravid again. ‘I will finish the quietly and go back,’ Dhoni said,” Sehwag added.

Speaking earlier in the conversation, Sehwag confirmed the notion that Dhoni never answered phone calls. He said that the BCCI secretary had given Dhoni a special phone, which he was told to answer because of his official commitments, but that he continues to never answer his personal phone.

Why has the Cred commercial with Rahul Dravid gone viral? The always affable Dravid laughing and shouting like a maniac, smashing rearview mirrors and throwing coffee, is a brilliant play on his persona. The less than 15 menacing seconds on-screen subverts expectations and public image of the 48-year-old.

“It was very nice to see the feedback, that somewhere we’ve communicated the dark side of Rahul Dravid that doesn’t even exist!” Ayappa KM, who directed the commercial, told The Indian Express.