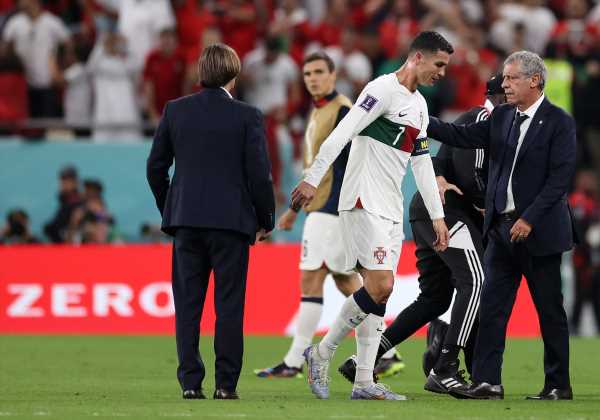 Portugal manager Fernando Santos said that he would not change his decision of leaving Cristiano Ronaldo on the bench even after his team was knocked-out from the World Cup due to a 1-0 defeat against Morocco in their quarter-final clash on Saturday.

Portugal’s all-time leading goal scorer with 118 goals in 195 appearances, Ronaldo was benched for Tuesday’s 6-1 win over Switzerland in the last 16 where the 21-year-old Ramos scored three in only his fourth appearance.

Ronaldo stormed off the pitch after the final whistle crying effusively while being comforted by his team mates.

“I do not regret (leaving Ronaldo on the bench),” coach Santos told a news conference on Saturday.

“It wouldn’t change anything, in terms of the team I can’t be thinking with my heart.”

“I used the team that played really well against Switzerland and there was no reason to change it (against Morocco).”

“It’s not that Ronaldo is no longer a great player, that has nothing to do with it.”

Morocco’s Atlas Lions extended their dream run and roared into the history books by becoming the first-ever African and Arab country to reach the final four of the tournament thanks to a Youssef En-Nesyri goal in the first-half.

Santos refused to comment on whether he will resign and said that he will talk to the Portuguese FA president over the next week about his future.

He said his team had difficulties finding spaces between the disciplined Moroccan defensive lines, and he praised their opponents for their effort, saying it was “completely their merit.”

“Sometimes in football what you need is a little bit of luck,” Santos said.

“We showed effort and quality, had several chances to score with Joao Felix, and Bruno Fernandes hit the bar, Pepe had a header in the end that could have been the equaliser… A bit of luck was missing.”