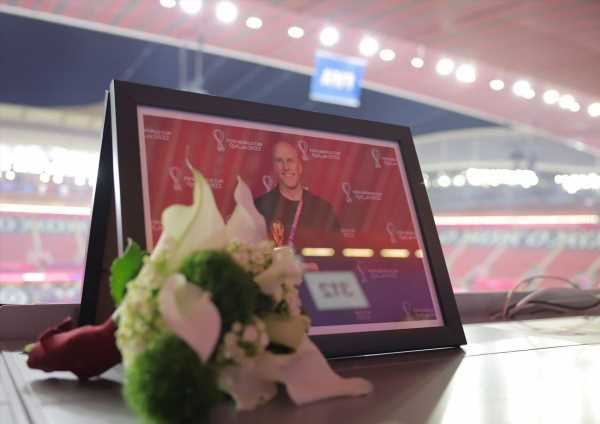 American football writer Grant Wahl was honoured with a tribute from FIFA on the desk where he was due to work Saturday at the World Cup quarterfinal match between France and England.

A posy of white lilies and a framed photograph of Wahl taken in Qatar was left at the media seat that had been assigned to the 48-year-old journalist who died at the World Cup in the early hours of Saturday.

‘Tonight we pay tribute to Grant Wahl at his assigned seat in Al Bayt Stadium. He should have been here,’ FIFA said in a statement.

‘Our thoughts remain with his wife Céline, his family, and his friends at this most difficult time.’ About 20 minutes before the match started, the photograph of Wahl was displayed on big screens in two corners of the stadium.

An announcement about his death was made to fans who applauded him.

Wahl fell ill while working during extra time of the Argentina-Netherlands game on Friday at Lusail Stadium.

His agent, Tim Scanlan, told Reuters that Wahl had “appeared to suffer some kind of acute distress in the start of extra time” at the quarter-final match.

Scanlan said attempts were made to revive Wahl in the press box at Lusail Stadium before he was taken by stretcher to a local hospital, where he was confirmed dead.