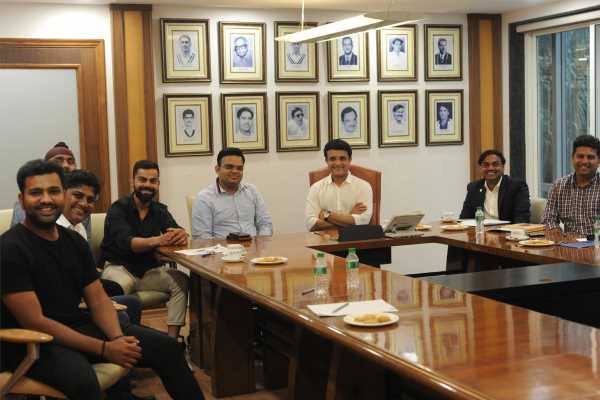 Sourav Ganguly has gone against the Board’s constitution by attending every selection meeting since taking over the BCCI president, the Indian Express revealed on Friday.

The Indian Express spoke to three past and present selectors under Ganguly’s tenure, who confirmed that he was a regular feature at selection meetings.

A senior BCCI official stated that Ganguly has attended every selection meeting since he took over as BCCI president in October 2019.

The Indian Express report added that: ‘Raising the issue of propriety, two selectors said Ganguly would log in for online selection meetings and because of his stature and position, no one could object.’

One of them revealed that they often felt ‘bullied’ by his presence.

‘It made many committee members uncomfortable and guarded in expressing their opinion,’ said the selector, speaking on the condition of anonymity, the Indian Express reported.

Last month, there was huge controversy when a journalist reported that a ‘BCCI official’ had been interfering with team selection for quite some time. The journalist said the official did so by inviting himself to selection committee meeting despite knowing that he had no business attending those meetings.

The former India captain not just rejected the accusations thrown at him but also offered a gentle reminder to his critics — much before becoming the BCCI boss, he was a celebrated India cricketer and played in a whopping 424 international matches — 113 of them Tests.

‘I don’t think I need to answer anybody anything (on this) and dignify any of these baseless accusations. I am the president of the BCCI and I do the job of what the president of BCCI should be doing,’ Ganguly said in his defence.

‘Also just to let you know, I see a picture doing the rounds showing me sitting in a selection committee meeting. I want to make it clear, that picture (where Ganguly can be seen sitting with BCCI Secretary Jay Amit Shah, then skipper Virat Kohli and BCCI joint secretary Jayesh George) wasn’t from a selection committee meeting,’ Ganguly had told PTI.

Multiple BCCI sources confirmed to the Indian Express about Ganguly’s presence at selection meetings. They said that considering the former captain’s stature — he played 113 Tests and 311 One-day Internationals — less-experienced selectors were ‘reluctant to express their opinion’.

This has undermined the power of Indian cricket’s all-important decision-making committee, they said.

Ganguly had revealed his control over selection matters in his personal message to Wriddhiman Saha, after he had scored a fifty against New Zealand, which the wicketkeeper-batter himself revealed to the media.

‘After scoring 61 against New Zealand at Kanpur, Dadi (Ganguly) congratulated me over WhatsApp and mentioned, ‘As long as I’m here (helming the BCCI), you would be in the team’. Such a message from the BCCI president really boosted my confidence. What I’m struggling to understand is how things have changed so fast,’ Saha had told The Sunday Express, referring to his omission from the team for the Sri Lanka Test series.