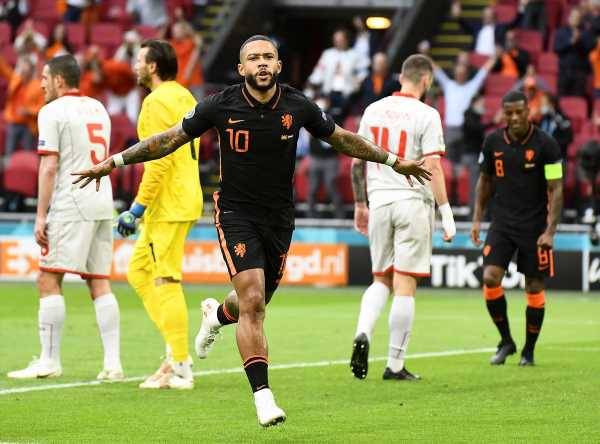 Memphis Depay scored one, he set up Georginio Wijnaldum for the next two, on Monday as the Netherlands beat North Macedonia 3-0 at Euro 2020.

Donyell Malen was a constant threat all over the pitch, linking superbly with main striker Memphis Depay and free-scoring midfielder Georginio Wijnaldum.

The PSV Eindhoven forward was instrumental in breaking the deadlock, finding Depay with a pass from deep before collecting the ball to shuttle down the right wing and find his strike partner to score. Netherlands new attacking partnership of Donyell Malen and Depay exchanged passes twice and the forward finished off a slick counter to slot home a left footer after 24 minutes to give Frank de Boer’s side the lead at the Amsterdam Arena.

The new Barcelona signing raced into the box and picked out Georginio Wijnaldum to tap home from close range to make it 2-0.

Wijnaldum and Depay combined again eight minutes later to put the game out of North Macedonia’s reach. Depay had an excellent game and was again sent into the box but saw his shot saved, however Wijnaldum was on hand to net the rebound.

The Netherlands topped Euro 2020 Group C by collecting nine points, while Austria placed second with six. The team will now head to Budapest for the round of 16 where they’ll play one of the third-placed teams.