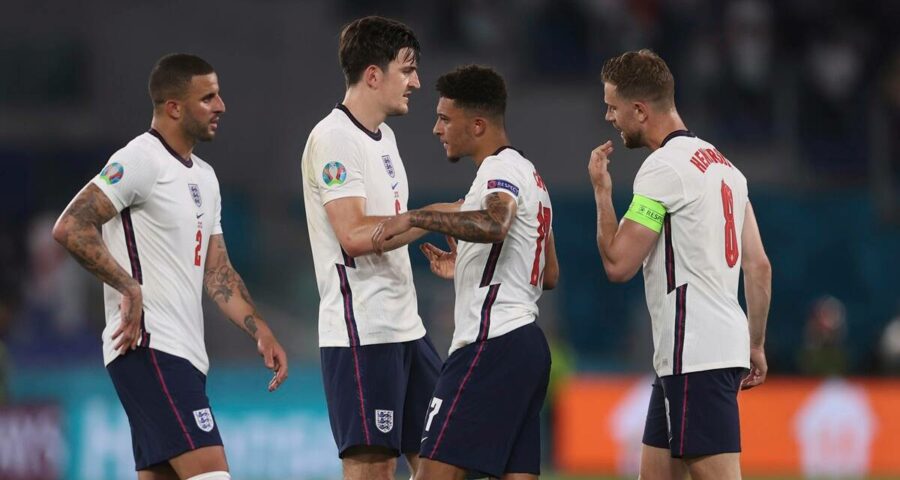 England’s resolute defence is the biggest reason for their progress, but Southgate may need to improvise against Denmark. The last time England encountered Denmark at Wembley, in a Nations League match last October, Harry Maguire left the field seething in rage, just 31 minutes into the game after copping his second yellow card. Five minutes later, his defensive colleague Kyle Walker and goalkeeper Jordan Pickford were locked in a horrible tangle with a Denmark player inside the box that culminated in a penalty, which turned out to be the match-defining moment. At the final whistle, full-back Reece James barged into the referee and picked up a red card himself.

Those were darker days in England football; Maguire was the tabloid villain after his storied and juicy escapades in Greece, right-back Kieran Trippier had to clear his name off betting charges; Tammy Abraham, Ben Chilwell and Jadon Sancho were busy churning out page-three-worthy stuff. The aforementioned match was seen not as prognosis, but proof of England’s indiscipline, especially of their defenders and goalkeeper. It was barely a month earlier that Pickford was slapped with the “bone-collector” moniker after taking down Liverpool’s Virgil van Dijk with a hideous challenge that kept the Dutchman out for the entire season.

The media scrutiny, understandably, was stinging after England’s defeat, though it was an inconsequential game. “It’s a night locked up in my memory,” Maguire once said. But it’s a night worth unlocking and reflecting, to ascertain the progress England, and specifically, the villains of that night, have since made.

Maguire has not just put the past behind, but grown into an exemplary leader and unbudging rock at the back, his proneness to self-destruct a distant feature of his petulant youth. Walker has smoothened his rough edges, marrying play-making instincts with defensive steel. Trippier has become clever and craftier, sharpened his crossing and strengthened his knack to reclaim the ball. Pickford has learned to harness his aggression in more useful ways than flipping his adversaries. His reflexes were never disputed; now his temperament and ability to inspire are being lauded. His saves in the Round of 16 encounter against Germany went a long way in keeping England afloat in stages similar to where they had imploded in the past. No goalkeeper has ever kept clean sheets in five successive games at the Euros. Not Gigi Buffon, not Iker Casillas, not Olivier Kahn, not Edwin van der Saar.

Two others who were wading through confidence crises the same time last year but have made incredible comebacks to the helm, Luke Shaw and John Stones, complete an unbreakable backline that has yet to concede a goal in the tournament. Stones embodies unhurried resoluteness, always at the right place at the right time; Shaw has improvised his game going forward while working on his aggression to reclaim the ball.

England’s defence is fast becoming the real deal in the tournament. To not ship in a goal in 400 and sundry minutes is no mean feat — and arguably a more definitive reason behind their march to the semifinals. Whereas their frontmen have garnered attention and praise before and throughout the tournament, it’s England’s unflinching defensive stability that has spurred their journey into the last four and made them one of the tournament favourites.

Apart from zero goals conceded, another stat illuminates their efficacy. They have made the fewest tackles in the championship, which denotes that they have not been frequently challenged into scenarios wherein they have no other option but to tackle – which is often a last-ditch effort – and characterised England’s defence in the past.

Against Germany, they were unflappable; against Ukraine, they were imposing. Denmark offer a different threat altogether. They are identical to the Germans, in both formation and function. Usually lining up in a 3-4-3 (they have surprised with 4-3-3 too), a lot of their creative duties are tasked on the wing-backs, the right-footed Joakim Maehle on the left, and either Daniel Wass or Jens Stryger Larsen on the right. Often, they run full pent and assume the inside forward’s role while one of their centre-forwards drops deeper into the midfield, pulling one of the centre-backs into him, thus providing his team numerical superiority for a brief, but vital, moment.

Mikkel Damsgaard, the replacement for Christian Eriken, has been exceptional in his ability to drag one of the defenders to follow him to the midfield. Equally important is tracking the run of midfielder Pierre-Emile Hojbjerg, a familiar face to England’s football followers. His role with the national team though is markedly different from the enforcer role he assumes for Tottenham Hotspur. Since Eriksen’s departure, he has taken a more attacking role, and forged a strong alliance with Thomas Delaney, with whom he interchanges roles and positions. Interchangeability of roles has been one of Denmark’s strengths, which England need to keep a sharp eye on. Moreover, unlike Germany and Ukraine, goal-scoring threats lurk across the field for Denmark with specialised long-rangers ready for half a sniff to flash their boot.

It could present Southgate with a formational dilemma, whether to stick with the fluid back-two plus two fullbacks or a more workmanlike back-three plus two full-backs, where England would match Denmark position for position. England’s defenders are adaptable to both, but a back-three means an attacker less, which invariably reduces their offensive threat, and if England end up losing, would risk both rebuke and ridicule. Besides, which of their attackers would they bench? Certainly not Harry Kane or Raheem Sterling. Taking out one of Jadon Sancho or Mason Mount would reduce both pace and creativity. Disrupting the central midfield pairing of Kalvin Phillips and Declan Rice would be delusional, and they could end up losing supremacy in the middle of the park.

Weaving in all the factors, it would not be a stroll on the Wembley turf. But it could be the night of resurrection for Harry Maguire and friends, who were, a disorganised mess, when they encountered Denmark the last time there.