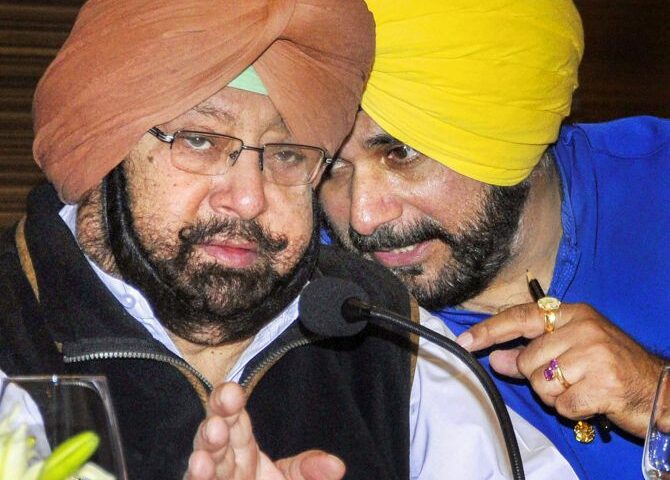 ‘He is worried about how best the Punjab crisis can be resolved.’

“It is media spiel that (Navjot Singh) Sidhu is a favourite of Rahul Gandhi and Priyanka Gandhi Vadra. We are all together in our fight for the welfare of Punjab,” says Shamsher Singh Dullo, the Congress’s Punjab Rajya Sabha MP.

A series of tweets, pointedly attacking only the Akali Dal for foisting unreasonable power purchase agreements on the state, by Sidhu, who is considered Captain Amarinder’s rival in the state Congress unit, and also a potential chief ministerial candidate in 2022, was the first sign of a cooldown between the two factions.

Earlier, the Sidhu camp had also blamed the chief minister for not cancelling the PPAs by amending laws in the state assembly.

“There is infighting in every party under the sun. The Akalis, the BJP, the AAP, all are riven with infighting. That is how democracy works. But it does affect when there are fights within a family. There is no doubt about that,” says Dullo, trying to deflect criticism that Punjab Congress is riven with factionalism.

Another chief minister-baiter, Pargat Singh Powar, the Congress MLA from Jalandhar Cantonment, who had told Rediff.com in an earlier interview that Captain Amarinder has failed Punjab, while maintaining his criticism of the chief minister blamed the media for painting a grim picture of groupism in Punjab Congress.

Says Pargat Singh: “We will fight the next assembly election together; there is hardly any groupism. The media is responsible for colouring it as groupism and factionalism.”

“It was an issue-based discussion. It was not about groupism,” says Pargat Singh about his 20-minute meeting with Rahul Gandhi last week.

Going all-out against the Akalis

We have to expose the Akalis for what they did with the power purchase agreements when they were the ruling party. They signed these PPAs,” says Pargat Singh. “But had Captain Sahab done it (implemented our manifesto) there would have no need for us to go to Delhi,” he adds.

“I told him (Rahul Gandhi) that he must tell the state government to fulfill its promises made in its manifesto to the people of Punjab. The Kharge Committee has already submitted a list of 18 points to the chief minister, which include our manifesto promises too,” says Dullo.

We are committing the same mistakes that the Akalis did,” says Dullo when asked what went wrong with the Congress’s four-year rule in Punjab. “The people rejected them (the Akalis) for unleashing mafia-dom in the state; we must put an end to that mafia raj,” he cautions.

Talking about the 18-point list that the three-member Kharge Committee submitted to the chief minister, Pargat Singh says, “The main points of contention remain drugs, PPAs, sacrilege issue, illegal mines and distilleries and basically it were done by the previous government, but we also fall in the same line.”

When asked about Rahul Gandhi’s response to his suggestions, Pargat Singh, a former Indian hockey captain, says, “He was quite receptive to the issues raised by many state leaders. Ultimately, we have to solve people’s issues. He was quite positive that the state Congress will emerge stronger from the discussions that he and the three-member Kharge Committee had with us.”

Explaining why the state leaders held a series of rounds with the Kharge Committee as well as with Rahul Gandhi, Pargat Singh says, “We had to convey our resolve very firmly (to national leaders in Delhi).”

“See, the situation is bad in the state. It would have been better had we worked for implementing our manifesto. We will have to show our performance. Else, we will be sent along the same road the people of Punjab sent the Akalis last time,” says Dullo sounding an alarm bell for Congress leaders in Delhi.