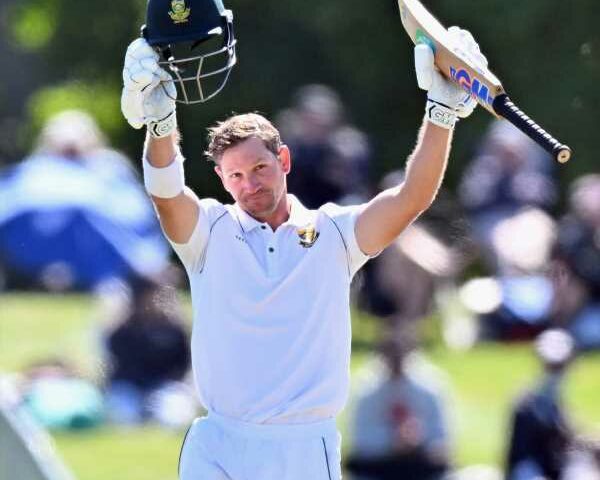 Rookie opener Sarel Erwee savoured a maiden century as South Africa dominated day one of the second Test against New Zealand in Christchurch to be 238 for three at the close on Friday.

Erwee managed only 10 runs on debut last week as his team crashed to defeat in the series-opener, but the left-hander rebounded superbly, resisting New Zealand’s attack for two sessions before falling for 108 after tea at Hagley Oval.

New Zealand captured two wickets in three balls in the final session to have South Africa 199 for three but squandered several chances to make further inroads with poor fielding.

Temba Bavuma was 22 not out and Rassie van der Dussen was on 13 at stumps, after their captain Dean Elgar won the toss and sent his team in to bat.

Number three Aiden Markram, spared the axe despite a dreadful run of form, chipped in 42, while Elgar had 41 in a 111-run opening partnership with Erwee.

He and Erwee reached lunch intact at 80 for no loss before pace veteran Tim Southee bowled the skipper with a sumptuous delivery that angled in and clipped the top of off-stump.

The opening partnership was South Africa’s first above 100 on tour since 2012, when Alviro Petersen and Graeme Smith combined for 138 in the second innings against Australia at Adelaide Oval.

It was also a record for a visiting team’s openers in Tests at the Christchurch ground. Erwee brought up his century in the final over before lunch, pulling Neil Wagner to the fence after grinding through five maiden overs.

He built an 88-run stand with Markram before the number three threw away his wicket with a needless drive away from the body off Wagner.

Erwee was out two balls later in similar fashion, flashing at a Matt Henry delivery to be caught behind.

Henry was unlucky not to have another wicket, with Bavuma surviving an edge that flew through the slips and another that fell just short with the first balls faced.

New Zealand’s frustration grew as they lost a review trying to remove Bavuma lbw off Southee.

Van der Dussen survived to stumps after being dropped on seven by Will Young who put down a chance at square leg, with Henry again denied a wicket.

Batsman Zubayr Hamza was ruled out with a fractured thumb, while pace bowlers Duanne Olivier and Glenton Stuurman were dropped.

New Zealand, missing captain Kane Williamson and pace spearhead Trent Boult, stuck with the same 11 who were dominant in the series-opener as they look to complete their first ever series win over the Proteas.

While a draw will be enough for New Zealand to win the series, victory would see them dislodge Australia as the world’s number one Test side, while shoring up their World Test Championship defence with maximum points.