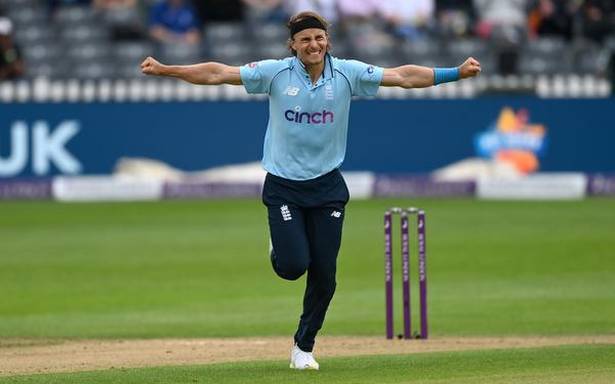 The washout meant that the hosts won the series 2-0.

Seamer Tom Curran picked up four middle-order wickets as England bowled Sri Lanka out for 166 in the third one-day international before the game was abandoned due to rain in Bristol on Sunday.

The washout meant that the hosts won the series 2-0.

While Sam Curran captured five wickets to script England’s victory at The Oval three days ago, it was his elder brother Tom who finished with 4-35 as the tourists were bundled out with 53 balls left in their innings.

Sri Lanka once again failed to make a solid start with the bat as captain Kusal Perera and fellow opener Avishka Fernando were removed by the new-ball attack of Chris Woakes and David Willey in the opening six overs.

Pathum Nissanka’s stint at the crease was also short-lived as he was caught behind off Willey, while Dhananjaya de Silva clipped a Woakes bouncer straight to deep fine-leg.

The tourists were tottering at 50-4 when Tom was brought into the attack and he wasted little time to remove Oshada Fernando for his first ODI wicket since March.

Wanindu Hasaranga was next to play a rash shot, holing out to a short ball for the third time in the series to give Tom his second wicket.

All-rounder Dasun Shanaka and Chamika Karunaratne adopted a cautious approach to add 29 runs for the seventh wicket, before Tom returned with his bag of tricks in overcast conditions.

The Surrey bowler used a scrambled seam to force an edge from Karunaratne’s bat, which was brilliantly caught by Jonny Bairstow diving to his right.

Tom then removed Binura Fernando for his fourth scalp to cap off a solid display.

Shanaka was unbeaten on 48 but ran out of partners as Asitha Fernando was run out by Sam Billings in the 42nd over before rain came down.