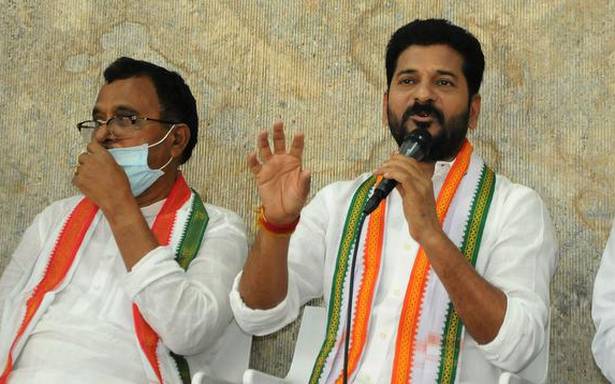 “Why is he skirting the issue when the AP government has taken up the projects to utilise its share of water? Is there any more pressing issue for him than attending the meeting of such importance,” he asked at a press conference here.

Mr. Reddy also observed that instead of presenting the government’s views strongly at the KRMB meeting, KCR is indirectly helping the AP government while raking up the sentiments of people. He suggested that KCR should sit on a fast-unto-death at Jantar Mantar in New Delhi to save Telangana interests in Krishna water and Congress would support it.

The new PCC chief also questioned the sincerity of the TRS government in agreeing to share Krishna waters in the 34:66 ratio with the AP government seven years ago. Mr. Harish Rao as the Irrigation Minister signed at the KRMB meeting agreeing to utilise 34% of Krishna water for Telangana projects and for seven years the government stuck to the same stand, he recalled. Now waking up from the slumber, the Chief Minister is talking about utilising 50% of water. “If he is sincere he should attend the KRMB meeting on July 9 and argue Telangana’s case there.”

The Congress chief reminded that former Minister Nagam Janardhan Reddy had written a letter to the CM on the very day AP Chief Minister Jaganmohan Reddy announced the Rayalaseema Lift Irrigation project and issued the GO. Later, Congress leaders continued to raise the issue but it fell on KCR’s deaf ears.

Mr. Revanth Reddy said Mahabubnagar district was denied its rights as KCR ignored Kalwakurthy, Bheema Koilsagar and Nettempadu projects of which 90% of works were completed during the Congress rule. Spending just ₹ 1,000 crore about 10 lakh acres could have been brought under cultivation. But he deliberately did not complete them and spent more than ₹ 1 lakh crore on Kaleshwaram project so far that served little purpose, he alleged.