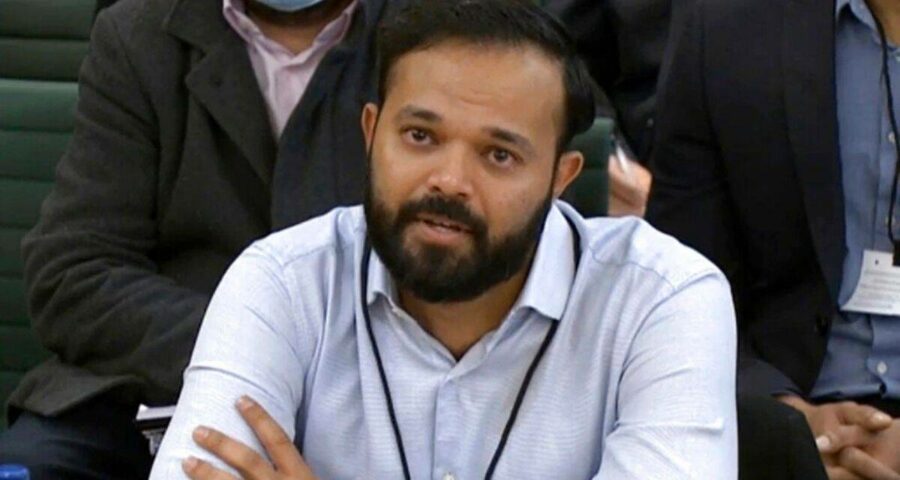 On Tuesday, former Yorkshire player Azeem Rafiq, at the centre of English cricket’s racism scandal, gave disturbing details from his playing days to the Leeds Employment Tribunal. The 30-year-old spinner, while alleging ill-treatment and bias because of his roots, had filed a case against the Yorkshire Cricket club. His emotional outpouring is part of the document published for public record on the UK Parliamentary committees website.

Following are the excerpts from Rafiq’s submission.

It was Hoggy [Matthew Hoggard] who started calling me “Raffa the Kaffir”. At the time, I honestly didn’t understand that it was a racist slur. My nickname at the club was “Raffa”, which was a shortening of my surname Rafiq, so when he started calling me “Raffa the Kaffir” – I just thought he said it because it rhymed. It was only later I realised what “Kaffir” meant, how it was used, and that it was a racist term.

The comments from Hoggy towards myself and the other Asian players – Adil, Ajmal and Rana – were constant, on a daily basis, and all day, every day. I think he might have thought it was just dressing room banter, but we would come in in the morning and he would say things like “you lot sit over there” and make us all sit together. He would also call us things like “elephant washers” and “P***”.

After I made my disclosure to the media (without naming any names and only referring to the terms that were used), Hoggy called me to apologise for what he had said to me. I thanked him and I respect him for that.

‘There’s too many of you lot’

Michael Vaughan was one of my cricketing heroes. I remember watching him captain England in the iconic Ashes series in 2005 – when I was captain of the England under 15s and playing for Yorkshire, like him – and I really looked up to and admired him and aspired to follow in his footsteps. In 2009, when I was 18, I remember being so excited to finally be in the same dressing room as him (Nottingham v Yorkshire, 22 June 2009). But the first thing he said to us, as the Asian players on the team (myself, Adil, Ajmal and Rana), after the huddle and as we were walking on to the field was “there’s too many of you lot. We need to have a word about that”. The four of us never played another match together again after that.

At the time, I remember being shocked and thinking, “did he actually just say that?”. I felt so disappointed that I felt sick. And then I felt angry. But I was so determined to play for England that I just tried to let it go. But I never forgot it. A lot of stuff that was said at YCCC hurt me, but hearing this from one of my cricketing heroes, it really stuck with me.

“Why are you talking to him he’s a Paki”

Gary Ballance is a cricketer from Zimbabwe who joined YCCC in 2008. While Hoggy started “Raffa the Kaffir”, it was Gary who really picked it up and really ran with it. Gary was also known to call any person of colour, “Kevin”.

I played in the first team before Gary did and was in and out of the first team between 2009 and 2011. It was 2012, when I made my breakthrough (which was around the time I began socialising more with the team, including drinking alcohol to try to fit in), so I started going out with Gary and Joe Root, and at that time I considered them both to be friends (I still consider Joe a friend). But over time, the constant racist banter from Gary became too much. He would constantly talk down to me and make racist jokes, designed to undermine me and make me feel small, like coming up

During the Abu Dhabi pre-season trip in 2009, Gary ridiculed me for not engaging in the drinking culture. On the last evening of the trip, everyone had to perform a show. Gary’s show, as always, was about him drinking sambuca and he was loved for his show. My show was non-alcohol related and Gary humiliated me in front of everyone for the lack of entertainment, compared to himself. Over time and after many comments like this, I felt pressure to participate in the drinking culture.

Gary would regularly make belittling or derogatory comments about my Pakistani heritage to others in front of me in various settings (“Don’t talk to him, he’s a Paki” or “Why are you talking to him he’s a Paki”), including on cricket trips and at functions. This happened in front of loads of people, including James Wainman, Joe Root, James Lee, Karl Carver, my agent Will Quinn and Bryan Teller. It got to the point that he said it so often, it became unbearable. I became completely fed up with it and I ended up having to complain to my agent, Will Quinn, on a number of occasions. At the PCA Awards event in 2014, Gary made another racist, belittling, racist comment to a woman about me in front of me, about me being Pakistani. I was so fed up that I wanted to hit him and we had to be pulled apart by our agent, Will Quinn.

On Martyn Moxon, Head Coach and then later, Director of Cricket.

In 2014, I was released from the Club by Martyn Moxon over a phone call. He indicated to me that this was as a result of my performance. Although I had suffered from YIPS in 2013 (PHB218), this was not a recurring problem and Martyn himself had confirmed on 24 April 2014 that “I had got over the YIPS problem” (PHB221). It was during this time in 2012 that I had been drinking, together with Adil Rashid, to try and fit into the Club culture. In retrospect, the constant racist comments and “banter” was affecting my mental state and my performance, But I was not offered support from the club, even though people knew I was struggling. It was in this period I had my first suicidal thoughts – and was one night on the brink of suicide. Even though I had got over the YIPS problem, I was released from the Club. I left the Club disillusioned in 2014.

Throughout 2017 and 2018, I struggled as a result of the bullying, targeting and racism I faced – to the point that, again, I had suicidal thoughts. Despite my disclosure Martyn to about this in August 2017, nothing was done. Soon after, I faced accusations of “faking injuries” and “ruling myself out” of selection by teammates, which meant that senior management (i.e. Martyn and others) were openly discussing my confidential medical records and their assessments of them. I was being left out of training and games.

When I returned to the Club after the bereavement period which was in or around June 2018, on the first day, Martyn Moxon pulled me into a room and started highlighting to me the problems that I had caused by not speaking to the coach (Andrew Gale) and the captain (Steve Patterson). I actually thought that he was asking to speak to me alone to ask how I was and how the family were after the trauma that we had endured, but his only concern was that the coach and captain had complained about me. I tried to explain the situation and how I had been assured I would play, which is why I had agreed to go and miss a critical medical appointment with my wife (which was critical in her pregnancy complications) but ended up with twelfth man duties instead. I reiterated that had he not done that and had I known I wasn’t playing, I would have been with my wife at a crucial medical appointment. But Martyn showed me no sympathy and categorically stated that I was a problem (see further below). Martyn’s behaviour confirmed to me that I was never going to get any support from the club no matter what I went through.