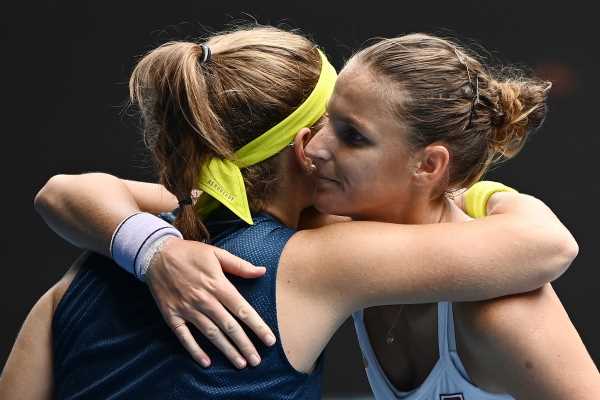 Images from Saturday’s action at the Australian Open.

Karolina Pliskova said she never got into her comfort zone on Saturday as the sixth seed exited the Australian Open following a 7-5, 7-5 third-round defeat by Czech compatriot Karolina Muchova at Rod Laver Arena.

Pliskova’s frustrations boiled over in the first set as she received a code violation for racket abuse and was then handed a point deduction for smashing another racket in the tunnel between sets.

Pliskova told a news conference she had been a little bit surprised at the second warning but that it had had a positive impact on her game.

“I think actually it helped me in the second set because I was (annoyed) so I started to play well,” she said. After losing the opening set Pliskova raced to a 5-0 lead in the second before the wheels came off, allowing Muchova to complete the victory and reach the fourth round in Melbourne for the first time.

“There was long game for 5-1 and 6-0. I thought she just played little bit better at this moment,” Pliskova added. “Of course, I played quite amazing to 5-0, but then it’s quite tough to hold this level.

“I had chances … on my serve, I just could do so many things better today. I don’t think my game is the top for sure. I don’t want to be too sarcastic and too negative because I just lost.

“The feeling was not great from any of my matches here. I think overall, too many mistakes, too much panic in the rallies. I don’t know if it’s just not having any matches much lately. I don’t feel like safe with anything I was doing on the court.”

Muchova, the world number 27, next faces either Switzerland’s Belinda Bencic or Elise Mertens of Belgium for a place in the quarter-finals. Daniil Medvedev was forced to dig deep to fight off a charging Filip Krajinovic on Saturday but came through 6-3, 6-3, 4-6, 3-6, 6-0 to extend his winning streak to 17 matches and join the Russian charge into the fourth round.

The frustrated fourth seed forced his coach Gilles Cervara from the otherwise empty stands at Rod Laver Arena with a couple of verbal volleys after dropping his first set of the tournament and going a break down in the fourth.

Krajinovic, who spent his pre-tournament quarantine practising with world number one Novak Djokovic, found success preying on Medvedev’s forehand and rode the momentum to send the contest into a fifth set.

A second trip to the toilets did the trick for Medvedev, however, and he broke the Serbian for 2-0 in the decider with a crunching forehand winner before sealing a last-16 date with American Mackenzie McDonald.

The 25-year-old, who had lost his six previous five-setters, joined compatriot Aslan Karatsev in the fourth round after the qualifier manufactured a stunning straight sets upset of Diego Schwartzman on Friday.

With seventh seed Andrey Rublev and Karen Khachanov also in action on Saturday, Russia could end up with an open era record four men in the last 16 of a Grand Slam.