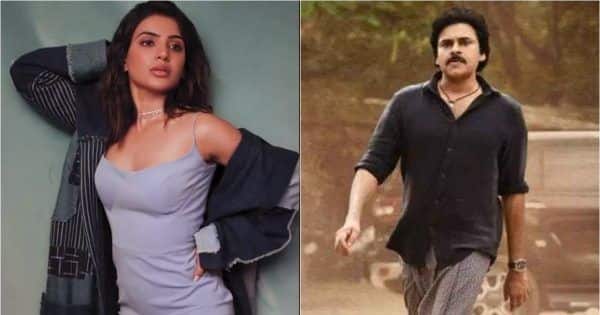 The world of entertainment has been very exciting today and we bring you a wrap of all the trending south news of the day. From Samantha Ruth Prabhu dancing to Thalapathy Vijay’s Arabic Kuthu from his upcoming film Beast to Pawan Kalyan’s multi-starrer Bheemla Nayak’s digital rights being sold for a whopping price, here’s a look at the top trending south news today.

Samantha Ruth Prabhu’s video of dancing at the airport on Thalapathy Vijay’s Halamithi Habibo from Beast is unmissable. Read the full story here.

Dasara: Nani and Keerthy Suresh starrer is a mass family entertainer set in a village – view plot and characterisation [EXCLUSIVE]

Dasara, starring Natural Star Nani and National Award winner Keerthy Suresh was recently launched and is said to be mounted on a lavish budget. Srikanth Odela will be directing the film. Read the full story here.

‘Akhanda’ director Boyapati Sreenu’s next film to be pan-Indian

After making waves with his last cinematic venture “Akhanda”, Telugu director Boyapati Sreenu is now teaming up with actor Ram Pothineni, and producer Srinivasaa Chhitturi, for a major project. According to a formal announcement made on Friday, the trio are now embarking on a pan-Indian movie project. After delivering two back to back hits including Samantha starrer “U-Turn”, Srinivasaa Chhitturi of Srinivasaa Silver Screen has just wrapped up production of “The Warriorr” starring Ram Pothineni and directed by N. Lingusamy. Boyapati Sreenu is fresh from the success of Nandamuri Balakrishna-starrer recent hit “Akhanda”, while Ram Pothineni is one of the most happening crazy heroes of the Telugu film industry.

It is reported that South India’s most happening heroines Sai Pallavi and Keerthy Suresh are invited to attend the trailer launch event of Sharwanand and Rashmika- starrer ‘Aadavallu Meeku Joharulu’. The makers of Sharwanand’s upcoming movie ‘Aadavalu Meeku Joharlu’ have arranged a trailer launch event, which will take place at the famous- Shilpa Kala Vedhika in Hyderabad on Saturday. Sai Pallavi, who is currently basking the glorious success of her movie ‘Shyam Singha Roy’ is one of the guests invited by the makers, while National-award-winning actress, ‘Mahanati’ Keerthy Suresh will also be present at the event.

Balakrishna starts shooting for ‘NBK107’ with a heavy action sequence

Nandamuri Balakrishna, who was last seen in Boyapati Srinu’s ‘Akhanda’, kick started shooting for his upcoming movie on Friday. Balakrishna and his team, who were present on the sets in Sircilla town of Telangana state, participated in the shooting. A fight scene which is being composed by Ram-Lakshman was canned on the first day of shooting. Balakrishna was spotted at the shooting place, as he shot for the heavy-action episode. Tentatively titled ‘NBK107’, this upcoming movie is to be directed by Gopi Chand Mallineni, who recently scored a hit with ‘Krack’.

As the Telugu multi-starrer ‘Bheemla Nayak’ gears up for release on February 25, there’s a buzz around that the film’s post-theatrical streaming rights. If reports are to be believed, the digital rights of the Pawan Kalyan and Rana Daggubati-starrer ‘Bheemla Nayak’ have been sold to OTT giant Disney+ Hotstar for a record price. From non-theatrical rights such as dubbing, OTT, and satellite, ‘Bheemla Nayak’ is said to have made close to 70 crores. Though there isn’t any official confirmation, it is expected that the makers will release a statement regarding the same in a couple of days.