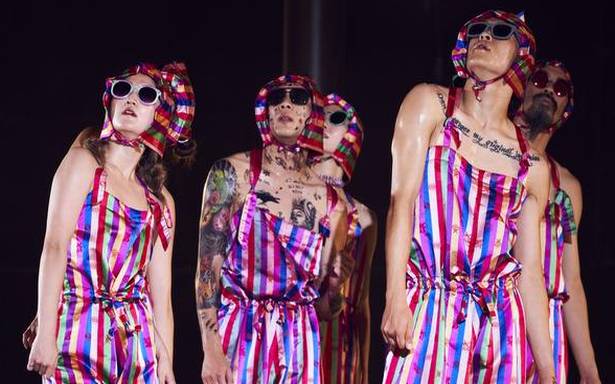 In a deserted space dotted by only black metal clamps and spotlights, a dancer moves. Though her arms are quick, her feet speak a deliberate, traditional, long-forgotten language of Korea; of its indigenous traces. At the same time, her funky sense of style calls for a contemporary outlook. Fever, a choreographed dance-music-fashion performance, is an amalgamation. Produced to commemorate the waning spirit of Korean traditions, the performance shines light on Korean classical dance and music through bold, contemporary strokes; be it in terms of its fashion or accompanying music.

The show, choreographed by Boram Kim and performed by Ambiguous Dance Company, is now available for virtual viewing, presented by Chennai’s InKo Centre.

The concept of Fever is rooted in Shakespeare’s A Midsummer Night’s Dream, says Kim of its inception. “The idea of dancing together with heung (joy), came from there,” he continues, adding that the performance was initially devised in 2016 and has since then undergone many revisions. He developed Fever into a street performance in 2019.

Kim says that the traditional aspect of the performance lies largely on the music and costumes and not so much the movements. “I didn’t intend to focus on the reinterpretation of tradition with choreography. Of course, there is some movement that looks inspired by traditional forms, but it is more to keep the choreography going. In terms of the music, Hye-won Choi, the music director who majored in traditional music, composed it in her own style. As for costumes, our members and I researched through traditional markets and the Internet over several months,” says Kim.

Kim always wondered why so many people think of tradition as something that is ‘old’. By exploring what we mean by ‘old’, he wished to create a “trendy style of tradition.” Which is what can be seen clearly in the fashion of Fever.

“In order to make tradition more trendy, we looked for a variety of concepts beyond design. Fit without meaning. I matched only the colours without meaning, and used the red Adidas sweat suit, a red jacket, and a red hat — a colour that is used for rites performed by Korean shamans, and they matched well beyond expectations. We also paired luxury goods with traditional Korean folk costumes,” he says.

Though rooted in Korean culture, the performance, Kim believes, has a global reach. “First of all, in our works, there are many aspects that can be enjoyed without thinking about the meaning. It would be just an opportunity to have fun, while thinking about the unique traditions of India as well,” concludes Kim.

Fever can be viewed at https://www.inkocentre.org/fever.html